From the Bookshelves: American Justice 2014: Nine Clashing Visions on the Supreme Court by Garrett Epps 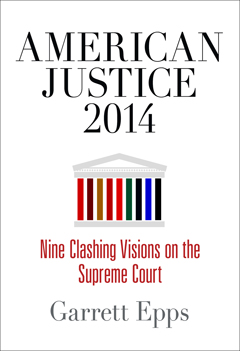 In this provocative and insightful book, constitutional scholar and journalist Garrett Epps reviews the key decisions of the 2013–2014 Supreme Court term through the words of the nation's nine most powerful legal authorities. Epps succinctly outlines one opinion or dissent from each justice during the recent term, using it to illuminate the political and ideological views that prevail on the court. The result is a highly readable summary of the term's most controversial cases as well as a probing investigation of the issues and personalities that shape the court's decisions. Accompanied by a concise overview of Supreme Court procedure and brief case summaries, American Justice 2014 is an engaging and instructive read for seasoned court-watchers as well as legal novices eager for an introduction to the least-understood branch of government. This revealing portrait of a year in legal action dramatizes the ways that the Court has come to reflect and encourage the polarization that increasingly defines American politics.

Garrett Epps is a contributing writer for The Atlantic and The American Prospect. His most recent book, American Epic: Reading the U.S. Constitution, was named a finalist for the American Bar Association's Silver Gavel Award. Epps is Professor of Law at the University of Baltimore.