Last week, the U.S. Census Bureau reported that the foreign-born population from Africa has grown rapidly in the United States during the last 40 years, increasing from about 80,000 in 1970 to about 1.6 million in the period from 2008 to 2012, according to a U.S. Census Bureau brief released today. The population has roughly doubled each decade since 1970, with the largest increase happening from 2000 to 2008-2012.

The Foreign-Born Population from Africa: 2008-2012, a brief based on American Community Survey statistics, shows that the African foreign-born population accounts for 4 percent of the total U.S. foreign-born population. No African country makes up the majority of these immigrants, but four countries — Nigeria, Ethiopia, Egypt and Ghana — make up 41 percent of the African-born total. 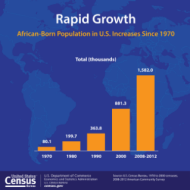