Visa program for wealthy investors maxed out by Chinese demand

A few weeks ago, the Los Angeles Times reported on a new visa development.   "Fueled by demand from wealthy Chinese nationals, an immigration program that exchanges visas for large investments in U.S. businesses has run out of its allotment of visas for the first time in its 24-year history. A State Department official said this week that no more EB-5 visas will be issued until the beginning of the 2015 fiscal year in October and that procedural changes planned for next year will bring greater delays in obtaining visas. Some people involved in the program say that the time it takes to get new visas could increase from a few months to up to two to three years. EB-5 investor visas reach record high EB-5 awards visas to immigrants who invest $500,000 to $1 million in a U.S. business. Applicants who can prove that their investment has created at least 10 jobs get permanent green cards." 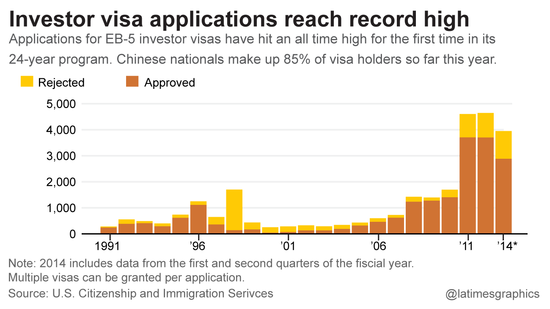