Immigrant of the Day: Paul Anka From Canada | Recording Artist 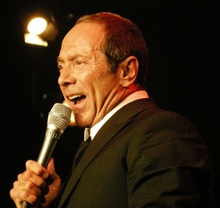 The prolific and enduring songwriter Paul Anka began his career as a teenager, scoring his first No. 1 hit with the single “Diana,” which he wrote and performed, in 1957. After a number of hits, he turned to songwriting, composing for Buddy Holly, Connie Francis, Frank Sinatra, and penning the Academy Award-nominated theme for the 1962 film The Longest Day, in which he also appeared. In the mid-1970s, Anka returned as a recording artist with the single “(You’re) Having My Baby” and others. He remains active as both a songwriter and recording artist.