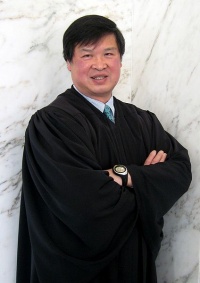 President Obama appointed Denny Chin to be a judge for the U.S. Court of Appeals for the Second Circuit in 2009. Prior to that, Chin had been was appointed by President Clinton to the position of U.S. District Judge for the Southern District of New York, in 1994, and in that role he presided over the notable case U.S. v. Madoff.

From 1994 to 2010, Judge Chin served as a United States District Judge for the Southern District of New York. He presided over a number of notable matters, including cases involving Megan's Law, the Million Youth March, Al Franken's use of the phrase "Fair and Balanced" in the title of a book, the Naked Cowboy, the Google Books Project, and the United Nations Oil for Food Program. He also presided over the trial of an Afghan warlord charged with conspiring to import heroin and the guilty plea and sentencing of financier Bernard L. Madoff.

Judge Chin has taught legal writing at Fordham Law School since 1986. While in private practice, he provided extensive pro bono representation to the Asian American Legal Defense and Education Fund. He served as President of the Asian American Bar Association of New York from 1992-1994. He has served on the boards of numerous non-profit organizations, including Hartley House, Care for the Homeless, the Clinton Housing Association and the Prospect Park Environmental Center. Judge Chin is currently a Vice President of the Fordham Law School Alumni Association, a member of the advisory boards of the Feerick Center for Social Justice and the Center on Law and Information Policy at Fordham Law School, and a member of the Board of Trustees of Princeton University. Judge Chin is the recipient of the Woodrow Wilson Award from Princeton University, the Spirit of Excellence Award from the American Bar Association, the Edward Weinfeld Award from the New York County Lawyers Association, the Lifetime Achievement Award from Judicial Friends, the Abely Award for Leading Women and Children to Safety from Sanctuary for Families, the Medal of Achievement from the Fordham Law Alumni Association, and the J. Edward Lumbard Award from the U.S. Attorney's Office for the Southern District of New York.