Immigrant of the Day: Isabel Toledo From Cuba | Fashion Designer 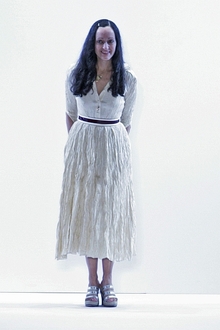 Toledo worked for five years as an antique-clothing restorer at the Costume Institute at the Metropolitan Museum of Art before she made her first collection in 1985, sewing each piece by hand. Working closely with her husband, Ruben, an illustrator, her inventive, architectural designs were featured in Cosmopolitan magazine and sold in exclusive fashion stores such as Bergdorf’s and Barneys. In 2008, she won the Couture Council Award for Artistry of Fashion from the Museum at FIT. A year later, Michelle Obama wore one of her designs on Inauguration Day, bringing Toledo to mainstream attention.