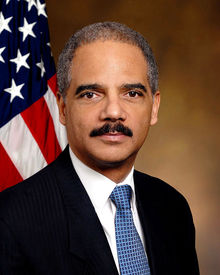 The invalidation of Arizona's immigration enforcement law known as SB 1070 is one of Attorney General Holder's most significant immigration achievements. In 2010, the Department of Justice filed suit against Arizona on the grounds that the state law was preempted by federal law. The Supreme Court ultimately invalidated the guts of SB 1070.  Holder said that although he was pleased that much of the law had been struck down, he remained concerned over the possibility that it might be used to discriminate against the Latino community. He vowed to continue to monitor the impact of the law.  The Supreme Court's decision in Arizona v. United States resulted in the invalidation of many state and local immigration enforcement laws.

Holder consistently supported comprehensive immigration reform, adding that it is a "matter of civil rights and human rights."

In June, Attorney General Holder announced a new program aimed at ensuring that illegal immigrant children who cross into the U.S. without a parent or guardian have legal representation in the United States. Holder announced an initiative called “justice AmeriCorps,” a grant program meant to fund lawyers and paralegals to provide legal services to these children.  Holder convinced Congress in the spending bill to include $315 million for the Executive Office for Immigration Review to to educate detained people about immigration rules and detention processes.