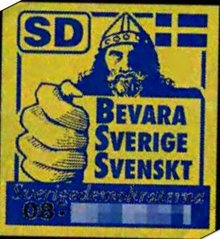 Bloomberg reportstht the Sweden Democrats, a nationalist party that targets deep cuts to immigration, is poised to double its support in elections next month.  Polls show the party garnering more than 10 percent of votes, enough to ensure that neither the government of the Prime Minister nor the Social Democrat-led opposition can win a majority on Sept. 14. Both blocs have refused to collaborate with the Sweden Democrats.  Support for the party, which came into being in the 1980s following a merger of political movements including a group called Keep Sweden Swedish, has swelled as the country absorbs a growing number of immigrants and asylum seekers from the Middle East. The development casts a shadow over Sweden’s reputation as an open society that has regularly topped United Nations rankings in accepting asylum seekers.