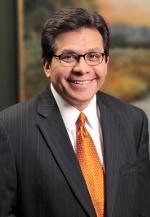 Dean Gonzales is writing on some interesting topics that capitalizes on his experience in the Bush administration directl.  Here are some of his articles abstracted on the Social Sciences Research Network:

In Search of Justice: An Examination of the Appointments of John G. Roberts and Samuel A. Alito to the U.S. Supreme Court and Their Impact on American Jurisprudence, William & Mary Bill of Rights, Vol. 22, No. 3, 2014, Belmont University College of Law Research Paper No. 2014-01

No Right at All: Putting Consular Notification in Its Rightful Place after Medellin, Florida Law Review, Forthcoming, Belmont University College of Law Research Paper No. 2014-04

An Immigration Crisis in a Nation of Immigrants: Why Amending the Fourteenth Amendment Won't Solve Our Problems, Minnesota Law Review, Vol. 96, p. 1859, 2012