THE U.S./MEXICO BORDER - A CONSTITUTION-FREE ZONE By David Bacon 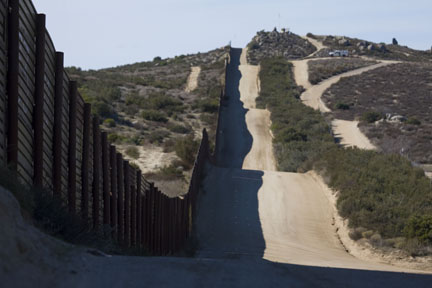 Under the Fourth Amendment, the people of the United States are not supposed to be subject to random and arbitrary stops and searches. But within 100 miles of a U.S. border, these rules don't apply.

Three facts about the Constitution-Free Zone

In the "Constitution-free zone," Border Patrol agents don't need a warrant or probable cause to conduct a "routine search." All travelers crossing a border are assigned a risk assessment score that will be retained for 40 years.

The Border Patrol can put a checkpoint anywhere in the Constitution-free zone (think Fifth Avenue!). "One hundred air miles is still, technically, the border," says Leslie Lawson from the Nogales Border Patrol Station. Everyone at a checkpoint must answer questions about citizenship status.

The Constitution-free zone extends 100 miles from any U.S. border. Two-thirds of the U.S. population (197.4 million in 2008) lives within this zone, which includes nine of the 10 largest metropolitan areas, and the entire populations of: Connecticut, Delaware, Washington, D.C., Florida, Hawaii, Maine, Massachusetts, Michigan, New Hampshire, New Jersey and Rhode Island; and over 90 percent of: California, Maryland, New York, Vermont and Washington.