Tiger Couple Gets It Wrong on Immigrant Success 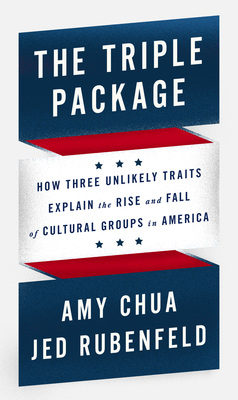 Stephen Steinberg in the Boston Review has this to say about a new book by a pair of Yale Law School professors:

The Triple Package: How Three Unlikely Traits Explain the Rise and Fall of Cultural Groups in America Amy Chua and Jed Rubenfeld Penguin, $27.95

"The tiger couple is chasing its own tail, which is to say, they are stuck in circular reasoning. In their new book, The Triple Package, Amy Chua, author of the best-selling Battle Hymn of the Tiger Mother, and Jed Rubenfeld tackle the question of why certain groups are overrepresented in the pantheon of success. They postulate the reason for their success is that these groups are endowed with “the triple package”: a superiority complex, a sense of insecurity, and impulse control. The skeptic asks, “How do we know that?” To which they respond: “They’re successful, aren’t they?”

"But Chua and Rubenfeld proffer no facts to show that their exemplars of ethnic success—Jewish Nobel Prize winners, Mormon business magnates, Cuban exiles, Indian and Chinese super-achievers—actually possess this triple package. Or that possessing these traits is what explains their disproportionate success. For that matter, they do not demonstrate that possessing the triple package is connected, through the mystical cord of history, to Jewish sages, Confucian precepts, or Mormon dogma. Perhaps, as critics of Max Weber’s The Protestant Ethic and the Spirit of Capitalism have contended, success came first and only later was wrapped in the cloth of religion. In other words, like elites throughout history, Chua and Rubenfeld’s exemplars enshroud their success in whatever system of cultural tropes was available, whether in the Talmud, Confucianism, Mormonism, or the idolatry of White Supremacy. The common thread that runs through these myths of success is that they provide indispensable legitimacy for social class hierarchy."

How can I keep up with the new policies and finding out what they are? I would love to learn more about the immigration law. It's even my dream to become an immigration lawyer one day! www.honoluluimmigration.net

Check out the many websites, blogs, etc. on the left side of this blog. there is a book Understanding Immigration Law that can serve as a primer.