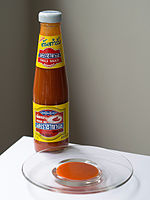 Law Professor Ernesto Hernandez-Lopez comments on a "hot" dispute in Southern California.  Local politics in California has ignited fear for fans of Sriracha, an extremely popular hot sauce, created for pho, a Vietnamese soup, and now fancied for Asian, taco and fusion dishes, sushi and street food. Celebrities, home chefs, even workers from the mailroom to the top offices are fans. Sriracha lovers around the globe are closely monitoring the actions of a small Los Angeles suburb that recently went to court to stop its production. The small city of Irwindale, east of Los Angeles, argues that Huy Fong Foods, maker of Sriracha, a hot chili sauce, emits harmful odors from a new plant within the city boundaries.  Click the link above to read more about the dispute.

By the way, David Tran, the founder of Huy Fong Foods, which manufactures Sriracha, has an amazing refugee story. See here, here, here.

The situation with Huy Fong Foods is certainly concerning, but we need to get a few things straight as this is an extremely serious subject.

1. Sriracha sauce was not created for phở, the Vietnamese soup. That is just its most popular application in the U.S. It is a Thai condiment and the name is an alternative transliteration of the place name of Si Racha, a coastal city in Eastern Thailand that is associated with its creation. It is now commonly used throughout Thailand and abroad.

2. As should be clear from above, Sriracha is not a brand name, and Huy Fong Foods is just the most popular manufacturer of the sauce in the U.S. Its claim to fame, and doubtless a key reason for the ascendance of the brand, is the innovation of the plastic squeeze bottle. The squeeze bottle is necessary because its version of the sauce has a higher viscosity than the Thai brands (which are generally sold in glass bottles).

3. The best nontraditional use of Sriracha sauce: The Al Davis Sandwich at Ike's Place in Oakland, a roast beef and bacon sandwich laced with horseradish sauce and Sriracha.

Thanks Scott. You know your Sriracha sauce (and bottle).