From the Bookshelves: The Crusades of Cesar Chavez: A Biography 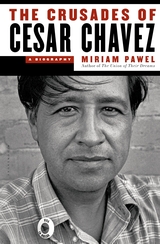 The Crusades of Cesar Chavez by Miriam Pawel

Cesar Chavez founded a labor union, launched a movement, and inspired a generation. He rose from migrant worker to national icon, becoming one of the great charismatic leaders of the 20th century. Two decades after his death, Chavez remains the most significant Latino leader in US history. Yet his life story has been told only in hagiography—until now.

In the first comprehensive biography of Chavez, Miriam Pawel offers a searching yet empathetic portrayal. Chavez emerges here as a visionary figure with tragic flaws; a brilliant strategist who sometimes stumbled; and a canny, streetwise organizer whose pragmatism was often at odds with his elusive, soaring dreams. He was an experimental thinker with eclectic passions—an avid, self-educated historian and a disciple of Gandhian non-violent protest.

Drawing on thousands of documents and scores of interviews, this superbly written life deepens our understanding of one of Chavez’s most salient qualities: his profound humanity. Pawel traces Chavez’s remarkable career as he conceived strategies that empowered the poor and vanquished California’s powerful agriculture industry, and his later shift from inspirational leadership to a cult of personality, with tragic consequences for the union he had built. The Crusades of Cesar Chavez reveals how this most unlikely American hero ignited one of the great social movements of our time.

Miriam Pawel is an award-winning reporter and editor who spent twenty-five years working for Newsday and the Los Angeles Times.

This book review in the Los Angeles Times highlights the book's look at Chavez's treatment of undocumented immigrants:

"Pawel does not shy away from the more disturbing sides of Chavez and the UFW. Chavez railed against illegal immigration, encouraging deportations — even though in parts of California most farm workers were undocumented, and many were willing to organize and become part of the UFW.

Cesar's cousin, Manuel Chavez, working for Chavez and the UFW, hired thugs to beat up migrants at the border in Arizona and bribed local police to let the vigilantes do their work, a project, as Pawel notes, decidedly at odds with Cesar's `steadfast commitment to nonviolence.'"

The Crusades of Cesar Chavez is likely to contrast sharply with the soon-to-be-released film Cesar Chavez.