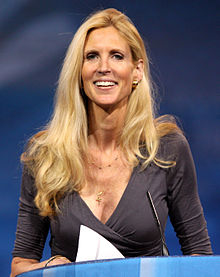 As reported on Huffington Post (with a video), Ann Coulter spoke yesterday at the Conservative Political Action Conference on, among other topics, immigration reform.:

"Amnesty goes through, and the Democrats have 30 million new voters. I just don't think Republicans have an obligation to forgive law-breaking just because the Democrats need another 30 million voters."