JFK and Immigration: A Nation of Immigrants 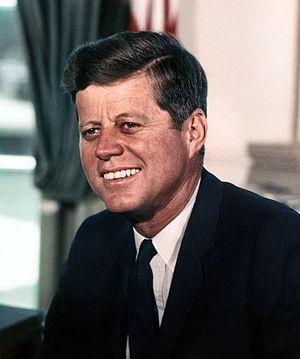 A brief bit of channel surfing reminds us all that it is the 50th anniversary of the assassination of President John F. Kennedy.  Besides the many documentaries, a television movie movie Killing Kennedy feaured Rob Lowe, who took a significant moral step up from the character he played (Alex) in the B film Bad Influence (1990), premiered last night. 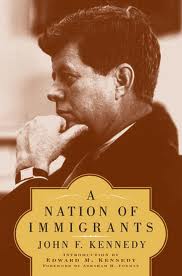 In all the hoopla, I wish that we might hear more about John F. Kennedy's book, A Nation of Immigrants.  Throughout his presidency, Kennedy was passionate about immigration reform. He believed that America is a nation of people who value both tradition and the exploration of new frontiers, people who deserve the freedom to build better lives for themselves in their adopted homeland. As continued debates on immigration reform engulf the nation, A Nation of Immigrants is as timely as ever.

The book was originally written by Kennedy in 1958, while he was still a senator, as part of the Anti-Defamation League's series entitled the One Nation Library. As President, Kennedy called on Congress to undertake a full reevaluation of the U.S. immigration laws and began to revise the book. In August 1963, excerpts of the 1958 pamphlet were published in the New York Times Magazine.  President Kennedy was assassinated before completing the revision, but the book was post-humously published in 1964 with an introduction by Robert F. Kennedy.  In 1965, Congress passed the Immigration Act of 1965, which abolished the discriminatory national origins system that Kennedy criticizes. In 2008, the book was reprinted by the Anti-Defamation League.

A Nation of Immigrants contains a short history of immigration in the United States beginning in colonial America, an analysis of the importance immigration has played in American history, and John F. Kennedy's proposals for the liberalization of immigration law.  Kennedy had this to say about Mexican immigration:

"Today many of our newcomers are from Mexico & Puerto Rico. We sometimes forget that Puerto Ricans are US citizens by birth & therefore cannot be considered immigrants. Nonetheless, they often receive the same discriminatory treatment and opprobrium that were faced by other waves of newcomers. The same things are said today of Puerto Ricans and Mexicans that were once said of Irish, Italians, Germans and Jews: "They'll never adjust; they can't learn the language; they won't be absorbed."

Perhaps our brightest hope for the future lies in the lessons of the past. As each new wave of immigration has reached America it has been faced with problems, not only the problems that come with making new homes and new jobs, but, more important, the problems of getting along with people of different backgrounds and habits.

Somehow, the difficult adjustments are made and people get down to the tasks of earning a living, raising a family, living with their neighbors, and, in the process, building a nation." (page 31, original edition).

An OnTheIssues.org review of the book says the following about the book:

It is shocking how little has changed in the 50 years since President Kennedy wrote this book. He wrote it to push for pro-immigration reforms in 1963 -- but the same arguments apply today as applied then. Kennedy cites detailed historical evidence to back his case -- the sort of evidence that immigration opponents routinely ignore. Kennedy's key lesson for today -- which was the same lesson he offered in 1963 -- is the old adage, "Those who ignore history are doomed to repeat it."

Kennedy's core argument is that Americans are all immigrants -- and therefore excluding certain immigrants from certain nations is nothing more than racism. Kennedy explicitly cites Mexicans as targets of such racial preferences -- it's hard to believe that the same issue is still here 50 years later. Some things have improved -- Eastern Europeans are no longer limited as they were until the 1960s; and Asians are no longer entirely excluded as they were until 1952 (p. 45). But for Mexicans, evidently opponents demonized them as much in the 1960 election as in the 2012 election.

Kennedy addresses just about all of the arguments that opponents today still cite. For decades following the 1880s, Kennedy cites, Italians immigrated to America by the millions for purely economic reasons -- which today is the key factor cited in why we should limit Mexican immigration.

Irish immigrants were bashed as mercilessly in the 1920s as Hispanics are bashed today. Kennedy cites the "Know-Nothing Party," which was formed to fight Irish immigration, as evidence of unique hatred of the Irish, since they are the only group to have inspired a political party against them. Kennedy might cite today's Tea Party as the second instance, formed in large part to fight Mexican immigration. Members of the Tea Party with Irish and Italian backgrounds might read those chapters on how their ancestors were discriminated against, before they bash Mexican immigration as harmful to America.

Kennedy cites (pp. 37-40) the first argument made in Congress to stop immigration -- in 1797 (no, that's not a typographical error; that would be on the floor of the United States House of Representatives during the 4th Congress; but the same argument is made in the 112th Congress today). The white male property-owning Anglo Saxon Protestant members of the 4th Congress lost their argument to exclude non-white, non-property-owning, non-Anglo Saxon, non-Protestants in 1797. Because they lost that argument in 1797 and in the two centuries since, we've come a long way -- but we all need to read about our own history to see why they SHOULD have lost then, and why the same arguments SHOULD lose again today, and tomorrow, and for the next two centuries."