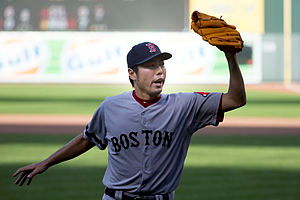 Born in Japan, Koji Uehara pitches for the Boston Red Sox of Major League Baseball. A right-handed pitcher, Uehara has a solid career strikeout rate and excellent walk rate.   Through the 2013 season, his career 8.74 K/BB is the best in MLB history for a player with at least 100 innings pitched.   Uehara has played with the Baltimore Orioles, Texas Rangers, and teh Boston Red Sox.

On October 19, 2013 Uehara recorded a save in game 6 of the American League Championship Series to help the Boston Red Sox win the Amrican League pennant and was named the series' Most Valuable Player.   He participated in 5 games, earning a win in one and saving three others.  Last night, Uehara had a nice pick off play to close out the game over the St. Louis Cardinals and knot up the World Series at 2-2.

Immigrants, including slugger David "Big Papi" Ortiz, have been a big part of the Boston Red Sox success.