From the Bookshelves: Global Crossings: Immigration, Civilization, and America by Alvaro Vargas Llosa 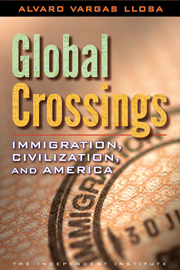 •  Contrary to sensationalist news reports, Hispanic immigration to the United States does not constitute an unprecedented “takeover.” At other times in U.S. history the population of foreign origin constituted a similar or larger proportion of the total population. From 1901 to 1913, an average of one million foreigners—about 2.5 percent of the domestic population—came into the United States every single year, whereas recent annual immigration has not exceeded 0.5 percent of the national population.

•  The flow of illegal immigration appears be a leading indicator of economic trends. From 2007 to 2009, the proportion of undocumented foreigners dropped by 8.4 percent in California and as much as 25 percent in Florida, where real estate markets were hit especially hard. In the greater Las Vegas, one of the fasted growing areas in the past 20 years, foreign workers began to leave in 2007. When Arizona passed its highly restrictive law in 2010, the annual influx of illegal immigrants stood at about one third of its most recent peak. This is not to say that the flow of workers responds exactly in sync with the demand for labor: border enforcement is a major impediment to smoothly functioning labor markets.

•  Fears that immigrants to the United States will resist assimilation and make natives feel like strangers in their own country are misplaced. The lure of assimilation in the United States is almost irresistible: the second generation in immigrant families typically speaks the language of the adopted country far better than their parents, and the third generation is even more assimilated. Even so, the U.S. educational system places onerous obstacles on the educational assimilation of immigrants. Despite the Supreme Court mandate that illegal immigrant children be allowed to go to school, only ten states permit them to go to college paying in-state tuition rates.

•  Fears that immigrant workers lead to lower wage rates are drastically overblown. The influx of immigrants to the United States from 1990 to 2004 led to a 1.5 percent reduction in the real wages of natives with less than a high-school education and cut the wages of earlier immigrants by about 10 percent. But it had the opposite effect on native workers with at least a high-school degree: it increased their wages by an average of 2 percent. The net impact was to increase average wages for all native workers by about 1.8 percent.

•  Although many poor immigrants do use the welfare state, this represents only part of the equation. For example, although the proportion of immigrant-headed households using at least one major welfare program in the United States is high—33 percent, compared to 19 percent for native households—illegal immigrant men also have higher rates of participation in the U.S. workforce than do U.S. citizens or legal foreigners—over 90 percent in 2003. Moreover, in every U.S. census since 1880 immigrants were more likely to be self-employed than natives. Claims about immigrants relying on the American welfare state must also be weighed against the fact that immigrants often bring with them an entrepreneurial spirit, and that immigrants have utilized their work ethic by founding many of the leading high-tech companies in the United States. Sergey Brin, co-founder of Google, came from Russia; Pierre Omidyar, founder of eBay, is the child of Iranian immigrants from France; Andy Grove, founder of Intel, was born in Hungary; Jerry Yang, co-founder of Yahoo, came from Taiwan; and Elon Musk, co-founder of PayPal, is from South Africa.

There was a time when the word “immigration” conjured up images of intrepid travelers arriving at Ellis Island, possessing barely a suitcase to hold their meager belongings but embraced by a country that welcomed the world’s “huddled masses yearning to breathe free.” In recent decades, however, many Americans have become skeptical, even critical of this ideal, preferring instead that the “nation of immigrants” welcome fewer foreigners, whatever their legal status. Debates about immigration are not confined to America, of course. Indeed, most of the same concerns that preoccupy immigration critics in the United States—worries about immigrants taking away jobs from native-born residents, depressing wage rates, resisting cultural assimilation, and putting undue strains on social services—are common throughout much of Europe, Latin America, Asia, and Africa, explains Alvaro Vargas Llosa, author of Global Crossings: Immigrations, Civilization, and America.A native of Peru who has lived and worked on three continents, Vargas Llosa has written an insightful analysis of the cultural, economic, and political ramifications of immigration—one the most enduring phenomena of the human story. Part historical treatise and part politico-economic analysis—and sprinkled with fascinating anecdotes from his personal experience around the world—Global Crossings is a far-reaching work that will captivate anyone curious about the drama inherit in the age-old quest to make a better life by moving abroad and about the government policies that often thwart that effort.