From the Bookshelves: Lives in the Balance: Asylum Adjudication by the Department of Homeland Security by Andrew I. Schoenholtz, Philip G. Schrag, and Jaya Ramji-Nogales 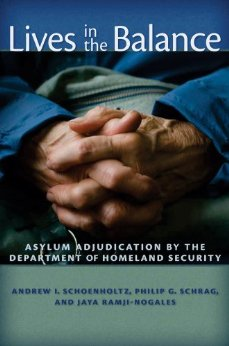 Lives in the Balance: Asylum Adjudication by the Department of Homeland Security by Andrew I. Schoenholtz, Philip G. Schrag, and Jaya Ramji-Nogales

Although Americans generally think that the U.S. Department of Homeland Security is focused only on preventing terrorism, one office within that agency has a humanitarian mission. Its Asylum Office adjudicates applications from people fleeing persecution in their homelands. Lives in the Balance is a careful empirical analysis of how Homeland Security decided these asylum cases over a recent fourteen-year period. Day in and day out, asylum officers make decisions with life-or-death consequences: determining which applicants are telling the truth and are at risk of persecution in their home countries, and which are ineligible for refugee status in America. In Lives in the Balance, the authors analyze a database of 383,000 cases provided to them by the government in order to better understand the effect on grant rates of a host of factors unrelated to the merits of asylum claims, including the one-year filing deadline, whether applicants entered the United States with a visa, whether applicants had dependents, whether they were represented, how many asylum cases their adjudicator had previously decided, and whether or not their adjudicator was a lawyer. The authors also examine the degree to which decisions were consistent among the eight regional asylum offices and within each of those offices. The authors’ recommendations­, including repeal of the one-year deadline­, would improve the adjudication process by reducing the impact of non-merits factors on asylum decisions. If adopted by the government, these proposals would improve the accuracy of outcomes for those whose lives hang in the balance.