From the Bookshelves: Exodus: How Migration is Changing Our World by Paul Collier 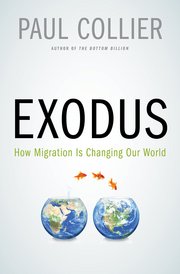 It is one of the most pressing and controversial questions of our time -- vehemently debated, steeped in ideology, profoundly divisive. Who should be allowed to immigrate and who not? What are the arguments for and against limiting the numbers? We are supposedly a nation of immigrants, and yet our policies reflect deep anxieties and the quirks of short-term self-interest, with effective legislation snagging on thousand-mile-long security fences and the question of how long and arduous the path to citizenship should be.

In Exodus, Paul Collier, the world-renowned economist and bestselling author of The Bottom Billion, clearly and concisely lays out the effects of encouraging or restricting migration. Drawing on original research and case studies, he explores this volatile issue from three perspectives: that of the migrants themselves, that of the people they leave behind, and that of the host societies where they relocate. As Collier shows, emigrants from the poorest countries of the world tend to be the best educated and most ambitious. And while these people often benefit economically by leaving their home countries, they also drain these countries of the skills they so desperately need. In the absence of controls, emigration would accelerate: the poorest countries would face nothing less than a mass exodus. Ultimately the danger is that both host and countries of origin may lose their national identities-an outcome that would be disastrous, Collier argues, as national identity remains a powerful force for good. Migration must be restricted to ensure that it benefits both those countries left behind and those opening their doors.

Immigration is a simple economic equation, but its effects are complex. Exodus confirms how crucial it will be that public policy face and address all of its ramifications. Sharply written and brilliantly clarifying, Exodus offers a provocative analysis of an issue that affects us all.

Paul Collier, CBE is a Professor of Economics, Director for the Centre for the Study of African Economies at the University of Oxford and Fellow of St Antony's College. He is the author of The Plundered Planet; Wars, Guns, and Votes; and The Bottom Billion, winner of Estoril Distinguished Book Prize, the Arthur Ross Book Award, and the Lionel Gelber Prize.

Here is a review of Exodus from The Economist.