From the Bookshelves: Born on the Border: Minutemen Vigilantes, Origins of Arizona's Anti-Immigrant Movement, and a Call for Increased Civil Disobedience by Ray Ybarra Maldonado Esq. 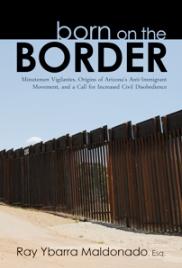 Born on the Border: Minutemen Vigilantes, Origins of Arizona's Anti-Immigrant Movement, and a Call for Increased Civil Disobedience by Ray Ybarra Maldonado Esq.

In 2004 vigilante groups patrolled the U.S.-Mexican border, hunting for migrants in the vast Arizona desert. A law student who hails from the small border town of Douglas, AZ takes off two years from his studies at Stanford Law School to return to Douglas to fight against the growing vigilante movement and the human rights abuses on the U.S.-Mexican border. This book provides a first-hand chronicle of the immigration debate that currently engulfs our nation. Ray Ybarra Maldonado writes about the border from his personal experience as a child and from the perspective of a dedicated activist who has travelled into the interior of Mexico to find victims of vigilante abuse. He also shares stories from his work at a migrant shelter in the Mexican border town where his mother was born, and from the middle of the Arizona desert where gun toting members of the Minutemen Project confront migrants crossing the militarized border. Born on the Border does more than chronicle the growing anti-immigrant movement that has emanated from Arizona, Ybarra Maldonado makes a compelling argument that the current immigration laws are immoral and that civil disobedience is needed so that human mobility can be recognized as a human right. While others are arguing over what comprehensive immigration reform looks like, the author’s personal conflict between doing what is morally right and breaking the law challenges readers to take a drastically different look at one of the most pressing issues facing nation-states in the 21st century: immigration and the human right to cross borders.