From the Bookshelves: Your Fatwa Does Not Apply Here: Untold Stories from the Fight against Muslim Fundamentalism by Karima Bennoune 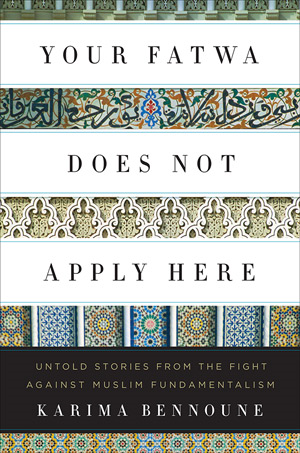 Your Fatwa Does Not Apply Here: Untold Stories from the Fight against Muslim Fundamentalism by Karima Bennoune

In Lahore, Pakistan, Faizan Peerzada resisted being relegated to a “dark corner” by staging a performing arts festival despite bomb attacks. In Algeria, publisher Omar Belhouchet and his fellow journalists struggled to put out their papers the same night that a 1996 jihadist bombing devastated their offices, killing eighteen of their colleagues and neighbors. In Afghanistan, Young Women for Change took to the streets of Kabul to denounce sexual harassment, undeterred by threats. In Minneapolis, Minnesota, Abdirizak Bihi organized a Ramadan basketball tournament among Somali refugees to counter recruitment efforts by Al Shabaab. In Egypt, female demonstrators tried to reclaim Tahrir Square on international women’s day despite Salafist harassment. In neighboring Sudan, women activists were dragged away from a Khartoum protest against the flogging of women for wearing trousers, but vowed to return “again and again.” From Karachi to Tunis, Kabul to Tehran, across the Middle East, North Africa, South Asia, and beyond, these trailblazers sometimes risked death to combat the rising tide of fundamentalism within their own countries and communities. Despite their courage and creativity, and the urgency of their efforts, this global community of writers, artists, doctors, musicians, museum curators, lawyers, activists, and educators of Muslim heritage remains largely invisible at the international level, lost amid the heated coverage of Islamist terror attacks on one side and abuses perpetrated against suspected terrorists on the other.

Increasingly frustrated with the stagnant, politicized public dialogue about the “clash of civilizations,” Karima Bennoune, an international human-rights lawyer, professor and activist, set out on an epic journey to change the conversation. She interviewed nearly 300 people from almost 30 countries, from Afghanistan to Mali and beyond. A veteran of twenty years of human rights research and activism, Bennoune draws on this extensive fieldwork and interviews to illuminate the inspiring stories of those who represent one of the best hopes for ending fundamentalist oppression worldwide.