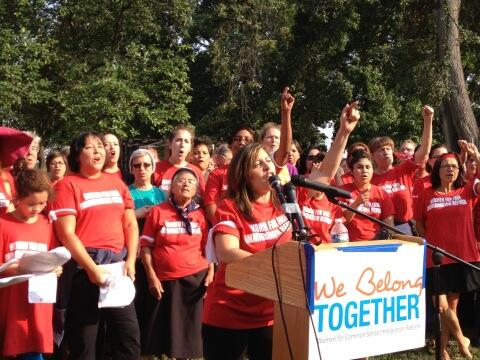 Approximately 100 women – including undocumented immigrants – will risk arrest on September 12 by blockading the intersection outside the House of Representatives to protest
their inaction on comprehensive and inclusive immigration reform that treats
women and children fairly.

Individuals who are participating in the act of civil disobedience will be available for interviews from approximately 9:00-10am. They may also be available afterward, depending on when they get released from jail if they get arrested.

The act of civil disobedience is expected to include the largest number of undocumented immigrant women to date who will willingly submit to arrest. An additional 200 supporters will stand witness for the group and call on the House to match their courage by passing immigration reform.

At a 9:30am press conference, more than 300 women and children will gather in front of the
Capitol Building, where national leaders – including Congresswoman Zoe Lofgren, ranking minority member on the Judiciary Subcommittee on Immigration and Border Security; Pramila Jayapal of We Belong Together; Nita Chaudhury of UltraViolet; Bertha Lewis of the Black Institute; Terry O’Neill of NOW; Rocio Inclan of National Education Association; and four undocumented women – will speak out about how women disproportionately bear the burden of the failed system, despite their considerable contributions to the wellbeing of their families,
communities and the country. After the press conference, before the act of civil disobedience begins, participants will take the Oath for a House United.

Following the rally, at 10 am, 100 women from across the country will join together in a circle to
claim the intersection outside the House of Representatives, calling for the House to similarly unite and pass immigration reform that keeps families together and values women.

After the act of civil disobedience, at 12:00pm, children will deliver “red hearts of courage” to House leadership and key swing representatives to embolden them to take action for
comprehensive immigration reform.

We Belong Together is a national campaign to bring forward the priorities of women in immigration reform, and to mobilize women to push for immigration reform that: includes a
clear path to citizenship; keeps families together and upholds the familyimmigration system; protects survivors of violence; prevents workplace abuses; promotes the health and wellbeing of women and children; honors women’s work inside and outside of the home; and is not driven by enforcement. We Belong Together is co-anchored by the National
Domestic Workers Alliance and the National Asian Pacific American Women’s Forum, with the participation of women’s organizations, immigrant rights groups, children, and families across the
country.

Check out recent reports on the events.  Here is the AP report.  Click here for pictures.