The Links Between the March on Washington, Civil Rights, and Immigration Reform

This weekend saw the 50th anniversary of the March on Washington and Martin Luther King's famous "I have a Dream" speech.  As th nation celebrates this anniversary, a new civil rights issue has been domininating the headlines -- immigration reform.

Not surprisingly, according to news reports, immigrant rights advocates came from near and far to be part of the commemoration. They included Casa de Maryland, founded by Central American immigrants in the D.C. area.

The link between the civil rights activism and America's immigration reality brings history full circle as the demographic change being seen across the United States owes some of its existence to  the Immigration and Nationality Act of 1965, itself a product of the civil rights movement that eliminated much discrimination (especially against Asians) in the U.S. immigration  laws. That Act lead to changing racial demographhics of immigration.

In 2006, in protest of a punitive immigration reform bill passed by the U.S. House of Representatives, tens of thousands of people took to the streets in cities across the country in protest. 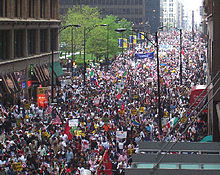 In recent months, there have been concerted political efforts to move Congress to pass comprehensive immigration reform.   We will see whether the activism bears fruit.

Listed below are links to weblogs that reference The Links Between the March on Washington, Civil Rights, and Immigration Reform: