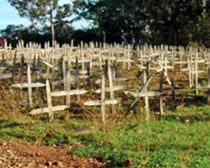 U.S. Immigration & Customs Enforcement reported yesterday that a Salvadoran man residing in Everett, Mass., who faces charges of crimes against humanity and state terror in Spain, was sentenced for immigration fraud and perjury in connection with false statements he made on immigration forms in order to remain in the United States. Inocente Orlando Montano, 71, was sentenced to 21 months in prison followed by one year of supervised release and a special assessment of $600. Montano previously agreed to be deported from the United States upon completion of his prison term. A judicial order of removal has been secured and he will be removed from the U.S. to El Salvador following his sentence.

Listed below are links to weblogs that reference Former Salvadoran military officer sentenced for perjury and concealing information from US government: