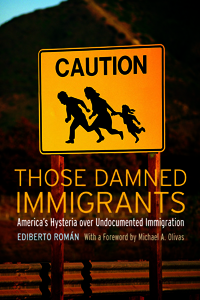 The election of Barack Obama prompted people around the world to herald the dawning of a new, postracial era in America. Yet a scant one month after Obama’s election, Jose Oswaldo Sucuzhanay, a 31-year old Ecuadorian immigrant, was ambushed by a group of white men as he walked arm and arm with his brother. Yelling anti-Latino slurs, the men beat Sucuzhanay into a coma. He died 5 days later. The incident is one of countless attacks—ranging from physical violence to raids on homes and workplaces to verbal abuse—that Latino/a immigrants have confronted for generations in America. And these attacks—physical and otherwise—are accepted by a substantial number of American citizens and elected officials, who are virulently opposed to immigrant groups crossing the Mexican border.

Quick to cast all Latino/a immigrants as illegal, opponents have place undocumented workers at the center of their anti-immigrant movement, and as such, many different types of native Spanish-speakers in this country (legal, illegal, citizen, guest), have been targeted as being responsible for increasing crime rates, a plummeting economy, and an erosion of traditional American values and culture.

In Those Damned Immigrants, Ediberto Román takes on critics of Latina/o immigration, drawing on empirical evidence to refute charges of links between immigration and crime, economic downfall, and a weakening of Anglo culture. Román utilizes government statistics, economic data, historical records, and social science research to provide a counter-narrative to what he argues is a largely one-sided public discourse on Latino/a immigration.

Listed below are links to weblogs that reference From the Bookshelves: Thise Damned Immigrants: America’s Hysteria over Undocumented Immigration by Ediberto Román: