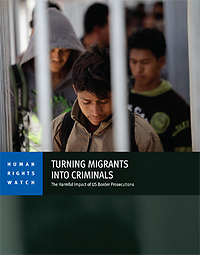 The skyrocketing criminal prosecutions of migrants for illegally entering or reentering the United States carry huge human and financial costs, Human Rights Watch said in a report released today. Imprisoning migrants with minor or no criminal records before deporting them often affects people seeking to reunite with their families in the US or fleeing persecution, Human Rights Watch said. The 82-page report, “Turning Migrants Into Criminals: The Harmful Impact of US Border Prosecutions,” documents the negative impact of illegal entry and reentry prosecutions, which have increased 1,400 and 300 percent, respectively, over the past 10 years and now outnumber prosecutions for all other federal crimes. Over 80,000 people were convicted of these crimes in 2012, many in rapid-fire mass prosecutions that violate due process rights. Many are separated from their US families, and a large number end up in costly and overcrowded federal prisons, some for months or years.