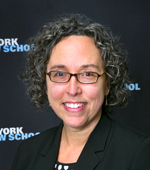 In a letter to the U.S. Senate Judiciary Committee, dated May 15th, the New York City Bar Association, through four of its Committees, urges the Senate to provide equality in immigration reform for same-sex spouses and permanent partners. Although the Senate Judiciary Committee declined to do so in the bill it forwarded, the City Bar reiterates its longstanding support, in any House or Senate immigration reform legislation, for family reunification that equally recognizes same-sex spouses and permanent partners.

The May 15th letter specifically urges the adoption of Senator Patrick Leahy’s Amendments 6 and 7 to the “Border Security, Economic Opportunity, and Immigration Modernization Act” (S. 744). These Amendments echo the “Uniting American Families Act” (H.R. 519), which New York Representative Jerrold Nadler introduced in the House with 130 co-sponsors in 2012.

The City Bar supports the Leahy Amendments for reasons of both equality and economics. “We urge the adoption of Sen. Leahy’s Amendments 6 and 7, and the passage of S. 744 generally, to provide long-overdue recognition of the diversity of families and the fundamental rights of individuals in committed marriages and permanent partnerships,” states the letter. “Moreover, these amendments have economic benefit, in encouraging all U.S. citizens and residents to live and work in America….In our global economy, we should not disadvantage U.S. residents and their partners from seeking opportunities, abroad or at home.”

In addition to supporting immigration equality for same-sex partnerships, the City Bar supports appointed counsel and reduced detention in any comprehensive immigration reform. The May 15th letter was signed by the Chairs of the City Bar Committees on Immigration and Nationality Law, Sex and the Law, LGBT Rights, and Civil Rights. The May 15th letter can be read here. The Leahy Amendments to S. 744 can be read at the following links: Amendment 6; Amendment 7.