From the Bookshelves: To Sin Against Hope: How America Has Failed Its Immigrants: A Personal History by Alfredo Gutierrez 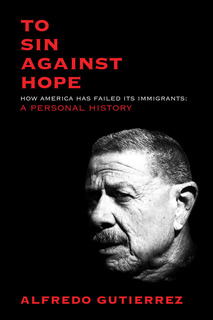 To Sin Against Hope: How America Has Failed Its Immigrants: A Personal History by Alfredo Gutierrez A moving life story from a leading voice in America’s immigrant rights struggle.

Alfredo Gutierrez’s father, a U.S. citizen, was deported to Mexico from his Arizona hometown—the mining town where Alfredo grew up. This occurred during a wave of anti-immigrant hysteria stoked by the Great Depression, but as Gutierrez makes clear, in a book that is both a personal chronicle and a thought-provoking history, the war on Mexican immigrants has rarely abated. Barack Obama now presides over an immigration policy every inch the equal of Herbert Hoover’s in its harshness. His family experiences inspired Gutierrez to pursue the life of a Chicano activist. Kicked out of Arizona State University after leading a takeover of the president’s office, he later became the majority leader of the Arizona State Senate. Later still, he was a successful political consultant. He remains an activist, and in this engrossing memoir and essay, he dissects the racism that has deformed a century of border policy—leading to a record number of deportations during the Obama presidency—and he analyzes the timidity of today’s immigrant advocacy organizations. To Sin Against Hope brings to light the problems that have prevented the US from honoring the contributions and aspirations of its immigrants. It is a call to remember history and act for the future.

Listed below are links to weblogs that reference From the Bookshelves: To Sin Against Hope: How America Has Failed Its Immigrants: A Personal History by Alfredo Gutierrez :