Congressional Budget Office: A Description of the Immigrant Population—2013 Update 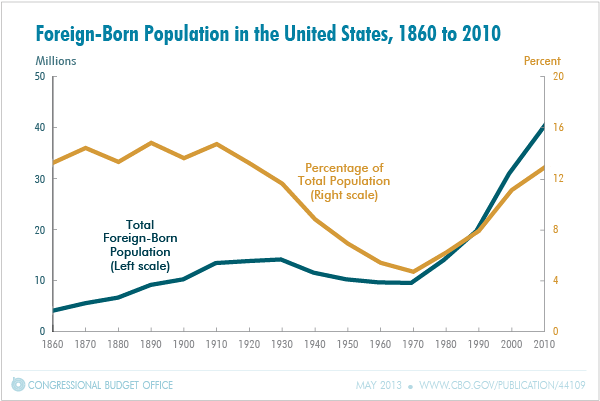 FOREIGN-BORN POPULATION:  From 1860 to 1910, between 13 percent and 15 percent of people in the United States were born in another country. After 1910, the share of the population composed of the foreign born began a steady decline, falling to less than 5 percent by 1970. But that share has increased rapidly since 1970, reaching about 13 percent in the past few years. About 40 million foreign-born people now live in the United States. Of that group, not quite half have fulfilled the requirements of U.S. citizenship. Of the remaining people, about half are authorized to live and work in the United States, and about half are not authorized to live or work in the country. 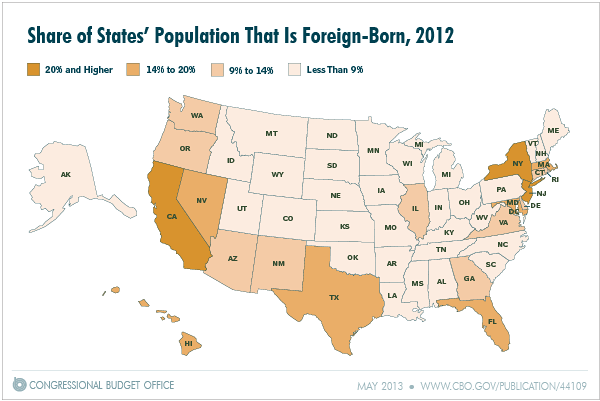 DISTRIBUTION OF IMMIGRANTS AMONG THE STATES:  In 2012, three states that account for more than one-fifth of the nation’s population—California, New York, and New Jersey—had a foreign-born population that, for each state, exceeded 20 percent of its total population. In another 17 states, accounting for more than a third of the U.S. population, foreign-born people made up between 9 percent and 20 percent of the state’s total. In the remaining 31 states, accounting for roughly two-fifths of the population—generally, states that are away from the East and West Coasts—the foreign born constituted less than 9 percent.

UNAUTHORIZED IMMIGRANTS:  The Department of Homeland Security (DHS) has estimated that, in 2011, about 11.5 million U.S. residents were in the country without legal authorization—about 3 million more than in 2000. Most of that increase was due to an increase in the unauthorized population from Mexico. According to DHS, in 2011 about 6.8 million unauthorized residents in the United States came from Mexico, an increase of more than 2 million since 2000.

Listed below are links to weblogs that reference Congressional Budget Office: A Description of the Immigrant Population—2013 Update: