At a White House ceremony Friday, President Obama conferred the National Medal of Technology and Innovation on Dr. Jan Vilcek, Professor of Microbiology at the NYU Langone Medical Center and President of the Vilcek Foundation.  Twenty-two other distinguished scientists and innovators were also recognized for their extraordinary accomplishments in science and engineering. 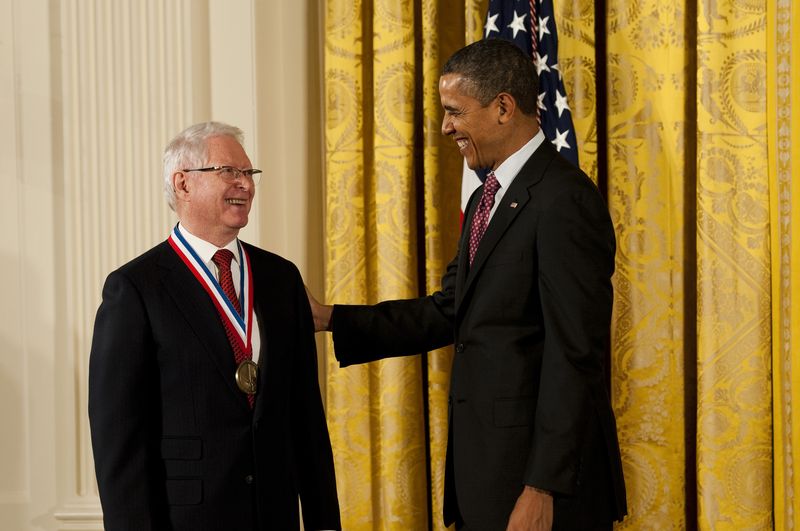 Dr. Vilcek, an immigrant from the former Czechoslovakia, received this honor for his pioneering work on interferons and contributions to the development of therapeutic monoclonal antibodies.  His work was instrumental in the development of the anti-inflammatory drug Remicade®, now widely used for the treatment of Crohn’s disease, rheumatoid arthritis and many other chronic inflammatory disorders.

Before conferring the National Medal of Honor on the top scientists, engineers and inventors in the United States, President Obama noted, “If there’s one idea that sets this country apart - one idea that makes us different from any other nations, it’s that here in America, success doesn’t depend on where you’re born or what your last name is. Success depends on the idea that you can dream up, possibilities that you envision, and the hard work, the blood, sweat, and tears you want to put in.”  Using Dr. Vilcek’s story as an example of the American dream, President Obama added, “One of the scientists being honored today is Jan Vilcek. Jan was born in Slovakia, to Jewish parents who fled the Nazis during World War II. To keep their young son safe, his parents placed him in an orphanage owned by Catholic nuns and later he and his mother were taken in by some brave farmers in a remote Slovak village and hidden until the war was over.  Today, Jan is a pioneer in the study of the immune system in the treatment of inflammatory diseases like arthritis.”

A native of Bratislava, Slovakia, Dr. Vilcek’s path to the United States was not an easy one.  Carrying little more than a suitcase and the list of a few professional contacts, Dr. Vilcek and his wife Marica defected from communist Czechoslovakia during a visit to Vienna, Austria.  From there, they crossed yet another border to West Germany, where they applied to be granted refugee status in order to receive immigrant visas to the United States.

Upon immigrating to the United States in 1965, Dr. Vilcek joined the faculty of New York University School of Medicine where he devoted his career to biomedical research in the field of immunology.  Marica Vilcek, an art historian by training, joined the curatorial staff of the Metropolitan Museum of Art.

A devoted scientist and educator, Dr. Vilcek is also a generous philanthropist.  With the royalties due to him for his inventions made as a faculty member at NYU, in 2000, Dr. Vilcek and his wife established the Vilcek Foundation, dedicated to raising awareness of immigrant contributions to the American arts and sciences.  The Foundation awards annual Vilcek Prizes in biomedical science and the arts, sponsors cultural programs, and hosts the work of immigrant artists in its gallery space in Manhattan’s Upper East Side.  The Foundation’s mission was inspired by the couple’s respective careers in biomedical science and art history.  The Vilceks have also made major gifts to the NYU Langone Medical Center and the Metropolitan Museum of Art.

Commenting on his award, Dr. Vilcek said, “As an immigrant scientist, I see this honor as a confirmation of the importance of revising our immigration polices, removing obstacles for qualified scientists and engineers from abroad to join our workforce, and thus helping to ensure that the United States continues to be the world leader in technology and innovation. I also see these awards as an affirmation of the importance of providing sufficient funding for scientific research.”

The Vilcek Foundation’s growth and development over the past decade is a tribute to Jan and Marica Vilcek’s appreciation for the opportunities they found as newcomers to the United States.  By linking American arts and sciences with immigrants’ contributions in its mission, the Vilcek Foundation possesses a unique and distinctly positive voice in the ongoing and often controversial dialogue over immigration in this country.

Listed below are links to weblogs that reference Former Czech Refugee Receives National Medal of Technology and Innovation: