Share
Will there be a pivotal moment in the immigrant rights movement?

In President Obama’s second inaugural address last week, he reminded us of powerful, iconic moments that have made a difference in the country’s social, political, and civil rights movements:

“We the people declare today that the most evident of truth that all of us are created equal -- is the star that guides us still; just as it guided our forebears through Seneca Falls and Selma and Stonewall; just as it guided all those men and women, sung and unsung, who left footprints along this great mall, to hear a preacher say that we cannot walk alone; to hear a King proclaim that our individual freedom is inextricably bound to the freedom of every soul on Earth.”

The Seneca Falls Convention, held over a two-day period in 1848, was the first women's-rights convention organized by women in the Western world. For many, the Convention marks the beginning of the women's movement in America. The Stonewall reference is to an uprising that took place in 1969 at the Greenwich Inn in Greenwich Village after police raided the unlicensed bar that was known to serve gay persons. Fed up with the harassment, customers resisted violently and arrests were made. Gay rights demonstrations and resistance ensued for six days, in this pinnacle event for modern gay and lesbian rights.

Selma was the 1965 starting point for three attempted civil rights marches to the Alabama state capitol in Montgomery, initially to protest the killing of Jimmie Lee Jackson and the denial of voting rights. State and local police attacked marchers with clubs and tear gas. The marchers, with growing numbers of supporters, finally reached the capitol under the protection 2,000 soldiers of the U.S. Army, 1,900 members of the Alabama National Guard under Federal command, and many FBI agents and Federal Marshals.  Martin Luther King, Jr. was among the marchers; of course, he delivered his “I Have a Dream” speech in 1963 on the U.S. Capitol Mall where Obama was sworn in on Monday. These are prominent events in the civil rights movement.

The immigrant rights movement apparently is missing such powerful a moment—a moment or event that becomes the turning point in making important strides in fair and humane immigration reform. A moment that can be referenced in an inauguration speech.

I thought that moment came on May 1, 2006. For weeks in the spring of 2006, television and newspapers featured spectacular images of masses of humanity lined up for miles in marches across the United States. The marches were overwhelmingly pro-immigrant. On May 1, many immigrants took to the streets, answering the spontaneous call by Spanish-speaking radio hosts and immigrant leaders to forego one day of work to protest.  Hundreds of thousands of U.S. citizens and immigrants peacefully marched in New York, Chicago, and Los Angeles; thousands more took to the streets in other cities across the country. In San Jose, California, the protest brought freeway traffic to a standstill. These immigrant rights demonstrations were unprecedented in American history. 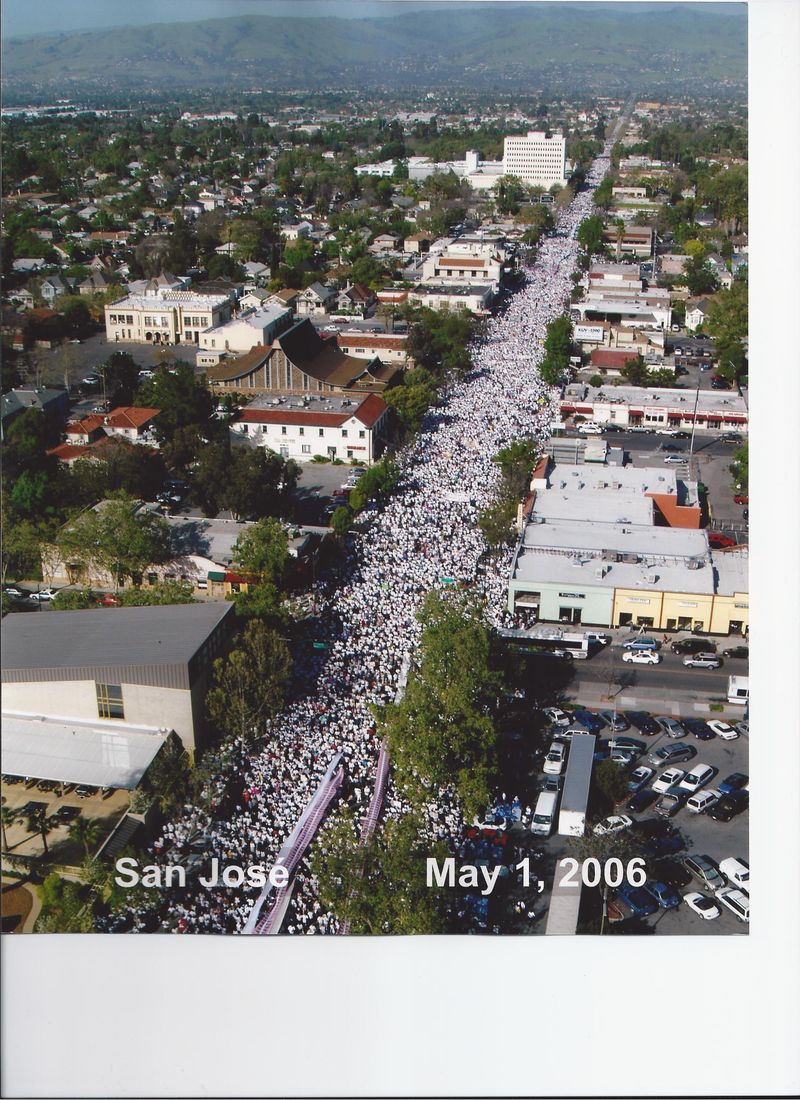 The first round of protests targeted a punitive bill, passed by the U.S. House of Representatives in December 2005, popularly known by the name of its sponsor Representative James Sensenbrenner. Among other things, the Sensenbrenner bill would have made the mere status of being an undocumented immigrant a felony subject to imprisonment as well as deportation from the United States. That was the final straw as far as countless immigrants and their supporters was concerned. The Sensenbrenner attack struck at the heart of every day, immigrant workers who were here to earn an honest day’s wage for an honest day’s work and to put food on the table for their family, because opportunities had dried up in the native countries.

Over time, the mass pro-immigrant protests of 2006 died down. However, we have seen indications of potential momentous actions in the last couple of years, largely through the efforts of DREAMers, who have fought so shrewdly and courageously for their right to be legalized. President Obama responded to their efforts by granting them temporary administrative relief, and he even alluded to DREAMers and migrants like their parents in his inauguration speech on Monday:

“It is now our generation’s task to carry on what those pioneers began, for our journey is not complete until . . . we find a better way to welcome the striving, hopeful immigrants who still see America as a land of opportunity; until bright young students and engineers are enlisted in our workforce rather than expelled from our country.”

We can hope and pray that policy makers do the right thing and legislate fair, comprehensive immigration reform out of a sense of justice and compassion or even to curry political votes in future elections. But why not give policy makers more to think about? More political action will be necessary to secure social change. It’s time for the immigrant rights movement to have its iconic Selma, Seneca Falls, and Stonewall moment. The marches of May 1, 2006 need to be repeated over and over again until immigrant voices are finally heard more broadly. DREAMers provided a glimpse of broad potential accomplishments that can be achieved, but only if the original immigrant dreamers—the parents, aunts, and uncles—make their voices heard.

Listed below are links to weblogs that reference We Need an Iconic Immigrant Rights Moment: