From the Bookshelves: Immigrant Struggles, Immigrant Gifts by Diane Portnoy 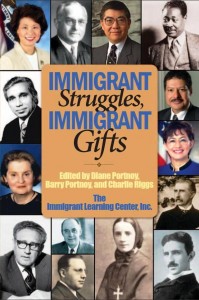 “It is said that the quality of recent immigration is undesirable. The time is quite within recent memory when the same thing was said of immigrants who, with their descendants, are now numbered among our best citizens.” – Grover Cleveland, veto message to proposed literacy test to restrict immigration, 1897

Sadly, this statement is no less true in 2012 than it was in 1897. Seen from today’s vantage point, it can be easy to forget that Germans were once derided for not speaking English, Eastern Europeans were considered inferior to real “white” people, and Mexicans have been an integral part of the social and economic fabric of the U.S. for more than 200 years.

Immigrant Struggles, Immigrant Gifts chronicles the experience of 11 immigrant groups in the U.S. written by 11 experts in their respective fields. By showing how each of these immigrant groups have faced discrimination, struggled to assimilate and ultimately made significant contributions to American life from the country’s founding through today, the current immigration debate can be seen as an ongoing dialogue repeating the same themes down through history. This book is part of The Immigrant Learning Center’s ongoing efforts through its Public Education Institute to educate the American public about the contributions of immigrants.

Listed below are links to weblogs that reference From the Bookshelves: Immigrant Struggles, Immigrant Gifts by Diane Portnoy: