Last week, the New York Civil Liberties Union filed a lawsuit challenging the state of New York’s routinized use of solitary confinement and other forms of extreme isolation in its prison system as violating the Eighth Amendment. According to the complaint, which draws from a report that the organization published earlier this year, New York uses extreme isolation as an administrative sanction more extensively than any other prison system in the country. From 2007 to 2011, the state imposed over 68,000 extreme isolation sentences for violations of prison rules, and on any given day, it holds approximately 4,500 individuals – constituting fully 8 percent of its total prison population – in its “Special Housing Unit” isolation cells.

As the NYCLU recounts, the circumstances and consequences of such extreme forms of confinement are exceptionally severe:

Every day, nearly 4,500 prisoners across New York live in extreme isolation, deprived of all meaningful human interaction or mental stimulation, confined to the small, barren cells where they spend 23 hours a day. Disembodied hands deliver meals through a slot in the cell door. “Recreation” offers no respite: An hour, alone, in an empty, outdoor pen, no larger than the cell, enclosed by high concrete walls or thick metal grates. No activities, programs or classes break up the day. No phone calls are allowed. Few personal possessions are permitted. These prisoners languish in isolation for days, weeks, months and even years on end.

Extreme isolation harms prisoners and corrections staff. . . . The emotional and psychological harm prisoners experience in extreme isolation is compounded by the formal and informal deprivation of basic necessities, including food, exercise and basic hygiene. Prisoners buckling under the emotional and psychological weight of isolation and deprivation often lack access to adequate medical and mental health care. For corrections staff, working in extreme isolation has lasting negative consequences that affect their lives at work and home.

Prison rules confer broad discretion upon corrections staff to determine which disciplinary infractions warrant extreme isolation as a sanction, with limited independent oversight or procedural protections for individuals charged with violations. The NYCLU’s investigation reveals the extensive, arbitrary use of extreme isolation to punish a sweeping array of minor rules violations, including “smoking in an undesignated area,” “wasting food,” “littering,” and “untidy cell or person.” Far from confining its use to short periods of confinement for truly exceptional circumstances, New York officials have instead relied upon extreme isolation “as a disciplinary tool of first resort for violating almost any prison rule, no matter how minor” – and in many cases, for prolonged and indefinite periods extending for months and even years. Even the Commissioner of New York’s Department of Corrections and Community Supervision, Brian Fischer, has publicly acknowledged that the state’s prison system “overuse[s]” extreme isolation. 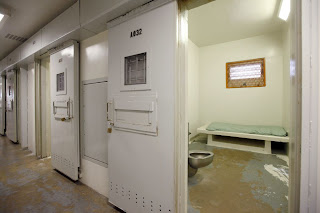 New York, of course, is hardly alone within the United States in its widespread use of excessive isolation. Conservative estimates indicate that tens of thousands of individuals nationwide – along a continuum ranging from short-term disciplinary segregation in isolation cells for days or weeks to long-term confinement under circumstances of extreme sensory deprivation in dedicated “supermax” facilities – are confined at any given time under circumstances of extreme isolation, which has become a central instrument in the criminal justice system’s strategy of “exclusion and control.” Indeed, Sharon Dolovich goes further to suggest that the logic of supermax might be “critical to the success of the entire carceral enterprise,” insofar as it seeks to “neatly contain” any possibility of disorder or disruption within prisons – and thereby to ensure that the very existence of individuals in prison, much less the circumstances of their incarceration, need not intrude upon the public consciousness.

Still, it is widely understood, as Keramet Reiter puts it rather plainly, that “[s]olitary confinement makes people crazy.” Even seemingly short periods of time in isolation can cause grave harms. In a 2011 report, the U.N. Special Rapporteur on Torture, Juan Mendez concluded that as implemented in many countries, including the United States, solitary confinement amounts to cruel, inhuman, or degrading treatment or punishment – and can even rise to the level of torture. Mendez concluded that solitary confinement should never exceed 15 days, given the potentially irreversible psychological harms that can result and, even when used for shorter periods, should only be used in exceptional circumstances as a last resort, and should be limited to definite terms that are as short as possible, communicated to incarcerated individuals, and subject to daily review by qualified medical and mental health professionals.

In recent years, lawyers, scholars, activists, journalists, bar associations, officials, and prisoners themselves have been increasingly effective in bringing concerns about extreme isolation into public view, documenting the ways in which solitary confinement and other forms of extreme isolation cause severe physical, emotional, and psychological harms and compromise safety prison and community safety – particularly when individuals are subjected to prolonged or indefinite periods of isolation. Activists Shane Bauer and Sarah Shourd, for example – who were subject to prolonged solitary confinement in Iran after being detained while hiking near the Iran-Iraq border in 2009 – have effectively used their ordeal in Iran as a springboard to draw attention to concerns over extreme isolation in the United States. The NYCLU’s lawsuit was preceded earlier this year by a lawsuit challenging California’s use of prolonged solitary confinement, and just last month, a federal district court in Massachusetts held that a prisoner’s solitary confinement for 10 months (for throwing pudding at another prisoner) without due process was unlawful. A number of states, including Mississippi, Colorado, and Maine, have taken steps to reduce the number of individuals subject to solitary confinement. And in Washington, Sen. Dick Durbin convened the first congressional hearing drawing attention to solitary confinement in June. As with other aspects of the criminal justice system, reform advocates seeking to curtail these extreme practices – which also are extremely expensive – have ample reason to regard the present moment as one for cautious optimism.

By comparison, little sustained attention has been given to concerns over solitary confinement and other forms of excessive isolation in the nation’s massive immigration detention system, which holds an average of approximately 34,000 individuals on any given day, and close to 400,000 individuals over the course of each year, in over 250 facilities around the country. But the limited information that has been documented paints a similarly grim picture. In 2010, a report on immigration detention in the United States by the Inter-American Commission on Human Rights raised concerns about the use of isolation in a number of facilities as an effectively punitive mechanism, particularly for LGBT individuals, religious minorities, and individuals with mental illness. And earlier this year, the National Immigrant Justice Center and Physicians for Human Rights jointly published the only report to date that specifically investigates the use of segregation and solitary confinement in immigration detention facilities, which frequently commingle individuals held for both immigration and criminal justice purposes:

ICE has failed to enforce consistent segregation standards in its detention facilities. As a consequence, jails often apply local correctional policies to manage both immigration and non-immigration detainees, leading to the widespread use of solitary confinement. . . . Investigators found that solitary confinement in immigration detention facilities is often arbitrarily applied, significantly overused, harmful to detainees’ health, and inadequately monitored.

Guards have unfettered power over immigrants, who have no legal recourse for unfair custody decisions. Investigators found instances in which jails justified the use of solitary confinement to discriminate against non-English-speaking immigrants and to punish immigration detainees for violations as trivial as dressing improperly or putting their feet on tables. Failure to speak English when able; watching Spanish channels on TV; sitting on counters, tables, or railings; leaning back on chairs; horseplay; pulling pranks; and singing loudly can all lead to 23-hour lockdown according to existing policies.

According to [ICE’s 2011 detention standards] and many county policies, detention facilities have 30 days to notify ICE when they place an individual in segregation. But facilities can easily avoid ICE oversight. . . . It is unclear whether ICE tracks information related to the segregation of detainees who have been held for less than 30 days. . . . Investigators spoke with a detainee at the Oakdale Federal Detention Center (Louisiana) who was held in solitary confinement for nearly eight months without review. Guards told him they “could hold him as long as [they] wanted” and that he was not going to be released from solitary confinement. [link]

These comparable harms raise distinct concerns in the context of immigration detention, which is a form of civil custody, not criminal punishment. In 2009, the Obama administration pledged to reconstruct this quasi-punitive detention regime into what ICE director John Morton termed a “truly civil detention system.” However, as Human Rights First has documented, those ambitious proposed reforms have thus far failed to transform the detention system away from the underlying criminal correctional paradigm that has characterized immigration detention since the 1980s and 1990s. Moreover, as the NYCLU report illustrates, simply documenting the nature and scale of excessive isolation is a challenging endeavor. In the immigration detention system, these same documentation challenges are compounded by the use of hundreds of facilities across the country – facilities that are often geographically isolated, and to which independent observers often lack meaningful access – and by the overwhelming lack of access to attorneys for many detainees. ICE’s own oversight and information tracking capacities have long been criticized. As the NIJC/PHR report notes, ICE’s nonbinding detention standards do not even require facilities to report their use of segregation for 30 days – a full 15 days after the point at which the UN Special Rapporteur regards solitary confinement to presumptively violate international human rights legal standards.

The apparently routinized use of solitary confinement documented by NIJC and PHR offers perhaps the sharpest illustration of ICE’s lack of progress in transforming the detention system to date. After all, one would be hard pressed to reconcile the routine use of solitary confinement and other forms of excessive isolation – which often rises to the level of cruel, inhuman, or degrading treatment or punishment or even torture in the criminal justice context – with a paradigm of custody meant to be “truly civil,” rather than punitive in nature. It certainly remains possible that as ICE continues to implement its reform initiatives, both oversight and conditions of confinement will improve. With respect to solitary confinement and other forms of extreme isolation, however, a basic and more fundamental challenge – for both the agency and reform advocates – appears to be documenting and drawing attention to the nature and scale of the problem.

(Cross-posted at Dorf on Law)

Listed below are links to weblogs that reference "Truly Civil" Torture: