Treatment of Sub-Saharan Migrants in Morocco 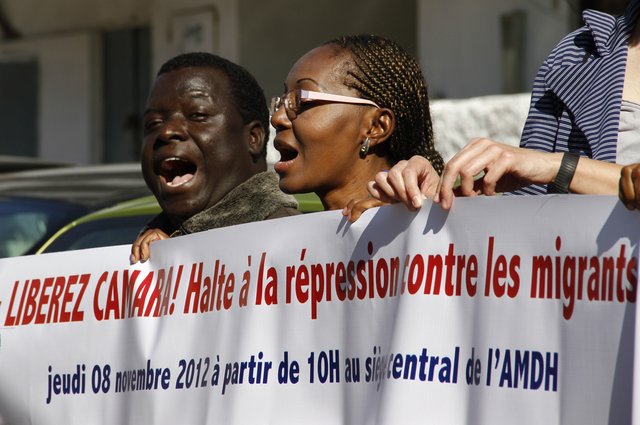 I spent this past year in Morocco teaching refugee law and humanitarian law at the University of Mohammad V in Rabat, Morocco on a Fulbright Fellowship. I spent some of my time learning and researching the plight of Sub-Saharan migrants in Morocco. While in Morocco, I met with various non-profit organizations who work with migrants (i.e, Anti-Racist Group to Defend Foreigners and Migrants (GADEM); United Nations High Commissioner for Refugees; and Council of Sub-Saharan Migrants) spoke with Sub-Saharan migrants and went to many conferences on the status of migrants in Morocco. I learned how the lack of human rights protections for undocumented migrants can result in the denial of human dignity for migrants.

Morocco’s legal system does not provide any forms relief for undocumented migrants who desire legalize their status in Morocco. Specifically, even though Morocco has ratified the Convention for the Protection of Refugees it does not have any implementing legislation to protect refugees and permit them to legalize their status. Further, there are the many human rights concerns that Sub-Saharan migrants face while attempting to transit through Morocco.

In September of 2012, fourteen people died in a boat off the coast of Morocco.  They were a part of seventy undocumented Sub-Saharan migrants who were attempting to gain entry into Spain. In addition, an activist, Laye Camara, was recently arrested for his activism on behalf of migrants. These incidents raise issues regarding the treatment and human rights status of Sub-Saharan migrants in Morocco.  It also raises issues regarding how a developing country should attempt to handle human rights concerns of Sub-Saharan migrants and how the international community should support Morocco’s efforts.

While I was in Morocco, the government’s response to these concerns was to work with the International Office of Migration on a program to repatriate migrants to their home countries and to provide migrants with a stipend upon return to their country of origin. Morocco also has programs with Spain where it receives funds for its youth in order to curb Moroccan citizens’ attempts to migrate to Spain.

Having practiced immigration law in the United States, I faced different and difficult challenges in Morocco as I attempted to navigate meetings with different organizations who provided inconsistent information regarding the types of protections that migrants were afforded. It was also difficult speaking with migrants and learning of the racism they experienced based on the color of their skin in Morocco.

Recently, Morocco has received a lot of negative press around the world for its treatment of Sub-Saharan migrants. Hopefully, the negative press will motivate governmental actors within Morocco to protect the rights of vulnerable undocumented migrants within its borders.

Recent articles on the treatment of migrants in Morocco:

Listed below are links to weblogs that reference Treatment of Sub-Saharan Migrants in Morocco: