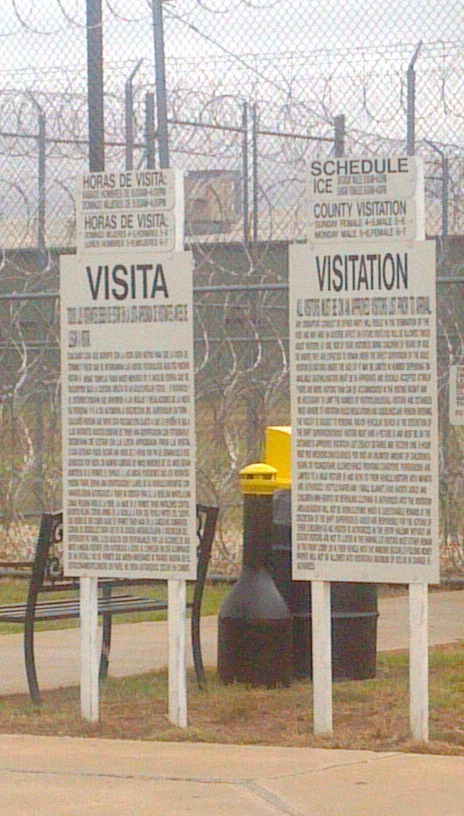 Many thanks to Kevin, Bill, and Rose for the kind invitation to be a guest contributor here for a couple of weeks.

As Rose mentioned, I have been privileged to participate as a moderator and panelist this fall in a terrific series of events convened across the country by Human Rights First, Dialogues on Detention: Applying Lessons from Criminal Justice Reform to the Immigration Detention System. The fourth of these day-long events will be held tomorrow (Friday, November 30) at Loyola University New Orleans Law School. As described on the HRF website:

The Dialogues convene experts, academics, policymakers, practitioners, advocates, and the private bar working in the immigration detention and corrections/criminal justice fields, as well as formerly detained individuals, to share knowledge, experiences, and best practices. We aim to help shift the national conversation on immigration detention, build alliances between stakeholders in both fields, and lay the groundwork for future improvements in policy and practice.

A list of background readings is available here, including a fact sheet on immigration detention in Louisiana. You can also read dispatches from the previous events in Texas, California, and Arizona by HRF Senior Associate Ruthie Epstein, who conceived and organized this event series to follow up on a comprehensive 2011 report documenting a wide range of human rights problems arising from immigration detention.

In recent years, a growing number of states and localities have undertaken important initiatives to temper the scale and severity of criminal incarceration and pretrial detention, including the expanded use of evidence-based risk assessment tools and alternative forms of pretrial custody; decriminalization of low-level drug offenses; reduction or elimination of sentencing disparities between crack and powder cocaine; elimination of mandatory minimum sentences; expansion of opportunities for earned credit towards periods of imprisonment, parole, and probation; expansion of eligibility for parole by elderly prisoners; and increased use of non-prison sanctions for technical parole and probation violations. Strikingly, despite the longstanding, conventional view that criminal justice reform constitutes one of the many proverbial “third rails” of American politics, many of these initiatives have garnered significant bipartisan support. As David Dagan and Steven Teles write in this month’s issue of Washington Monthly, a growing number of evangelicals and libertarians – perhaps most prominently as part of the Texas Public Policy Foundation’s “Right on Crime” campaign – have joined forces with liberal reformers to advance these initiatives, after “[d]iscovering that the nation’s prison growth is morally objectionable by their own, conservative standards.”

In Louisiana, for example – which incarcerates more individuals per capita than any other state, and has been dubbed by state’s own Times-Picayune as "the world's prison capital" – Gov. Bobby Jindal signed a series of reforms into law earlier this year that, among other things, grants prosecutors discretion to waive mandatory minimum sentences for non-violent, non-sexual offenders; provides an earlier opportunity for certain non-violent, non-sexual repeat offenders to obtain a parole eligibility hearing; allows certain non-violent offenders sentenced to life imprisonment (including life without parole) an earlier opportunity for release; and expands pilot programs designed to facilitate reentry from prison. Among the arguably unlikely proponents of these reforms was Blueprint Louisiana, a civic organization whose leaders draw extensively from the state’s business community and which evidently concluded that criminal justice reform is important to help make the state’s residents “rightly proud to say, 'I live in Louisiana,’” as the group describes its mission.

For its part, Congress has also adopted bipartisan criminal justice reforms in recent years, enacting both the Prison Rape Elimination Act in 2003 and the Second Chance Act in 2007 with limited if any opposition. Even the Supreme Court has gotten in on the act with its 2011 decision in Brown v. Plata, which upheld by a 5-4 margin a three-judge district court’s order that (notwithstanding the limits imposed by the Prison Litigation Reform Act) California reduce its prison population to remedy conceded Eighth Amendment violations arising from severe prison overcrowding. The Court’s decision was sufficiently significant to prompt Jonathan Simon to contemplate the prospect that it might signal the revitalization of human dignity as a meaningful constitutional value in the United States.

So how might these criminal justice reform initiatives be instructive for efforts to similarly temper the scale and severity of immigration detention? Whether in the criminal justice system or the immigration enforcement context, incarceration is extremely expensive compared to its alternatives, and to a considerable extent, these reform efforts have been driven by fiscal considerations, particularly in the wake of the financial crisis. For example, in signing Louisiana’s reforms into law, Jindal highlighted their importance in “streamlin[ing]” criminal justice processes and making them “more efficient.” At least to date, however, fiscal considerations have not similarly exercised any gravitational pull upon efforts to reform immigration detention and enforcement, since Congress has proven willing to commit additional enforcement resources largely without regard to cost. (Witness, for example, Rep. Lamar Smith’s comments dismissing altogether the relevance of immigration detention’s extraordinary costs during a hearing last year on his bill to expand prolonged and potentially indefinite detention – and doing so at a moment when debate already had been raging over whether Congress should raise the debt ceiling without exacting major reductions in government programs in return.)

More fundamentally, this emphasis on costs has serious potential limitations. As scholars including Sharon Dolovich have cautioned, reform programs based on fiscal constraints and other practical flaws in the prevailing approaches to mass criminal incarceration may not prove durable insofar as they leave intact the underlying logic and ideology of “exclusion and control” that dominates public discourse and criminal justice practices:

[F]or reductions in the prison population to be sustained over the long term, they must be complemented by the provision of effective drug treatment programs, educational and vocational training for those in custody, and assistance for former prisoners seeking to assemble the components of a stable life on the outside (home, job, drug treatment, family reunification, etc.). Otherwise, it is just as likely that many of the people granted early release will eventually reoffend. And when that happens, so long as the mindset of exclusion and control remains undisturbed, their subsequent offenses will be traced, not to the state’s shortsightedness in releasing people from prison in a worse position than when they went in, but to a willful and deliberate refusal on the part of former prisoners to obey the law—a refusal that may only seem all the more galling because undertaken despite the state’s beneficence in granting early release. Even assuming the present fiscal crisis were to generate a contraction in the carceral apparatus, unless there is a fundamental shift in society’s commitments away from exclusion and control as a matter of principle, this contraction would only last until the economy revives. [link]

The uneven staying power of some recent state experiments with expanding early release from prison, as documented by Cecelia Klingele, offers but one example suggesting that Dolovich’s cautionary note is warranted. And such hazards are no less present with efforts to reform immigration detention and enforcement. Indeed, as I have previously argued, the worthy detention reforms undertaken by the Obama administration since 2009 have been hindered by an analogous failure to dismantle the quasi-punitive logic and institutional practices that have emerged in immigration enforcement over the past two decades. Indeed, quite to the contrary, the administration has only reinforced that underlying logic by expanding quasi-punitive enforcement practices to an even greater extent than its predecessors – leaving the ultimate fate of its important and ambitious detention reform project in considerable doubt.

None of this is to suggest that these reform initiatives are not important simply because they have been triggered by fiscal considerations. Dagan and Teles maintain that these recent shifts in the criminal justice reform agenda rest upon far more than simply budgetary concerns. And Dolovich herself fully acknowledges that these recent reform initiatives are indeed “bright spots” that might eventually contribute to the more fundamental paradigm shift necessary to dismantle, in a more durable manner, what she terms society’s existing “carceral bargain.” In fact, Dagan and Teles go much further, contending that these reform initiatives offer more far-reaching lessons on “how bipartisan policy breakthroughs are still possible in our polarized age” across any number of policy areas.

So advocates of criminal justice reform can certainly regard the present moment as one offering legitimate reasons to be hopeful. But for the reasons to which Dolovich draws attention, it remains deeply uncertain whether these nascent reforms will effect a meaningful, politically viable paradigm shift. Whether they offer potentially transferable lessons for other policy domains, including immigration detention and immigration reform more generally, remains even more so. In a subsequent post, I will offer some very preliminary thoughts on whether the current reckoning over immigration reform by leading Republicans – owing to their self-perception of having fallen off the demographic cliff as a political party during the recent election -- foreshadows the kind of paradigm shift necessary to transform immigration policy, including detention and enforcement, in a durable, politically sustainable way.

For those of you able to be in New Orleans, I hope to see some of you tomorrow at Loyola. Judging by the earlier events in the series in Texas, California, and Arizona, the conversations tomorrow in New Orleans should be rich and worthwhile. For those of you unable to attend in person, you can follow along and contribute to the dialogue from afar on Twitter, using the hashtag #HRFDetention.

(A version of this post has been cross-posted at Dorf on Law.)

Listed below are links to weblogs that reference Lessons from Criminal Justice Reform for Immigration Detention: