After the San Francisco Giants won the World Series, slugger Pablo Sandoval was named the Series Most Valuable Player. "Panda" as he is affectionately called by teammates and San Francisco fans is proud of being a native of Venezuela. Turns out that nine players from Venezuela were on the Giants and opponent Detroit Tigers teams. 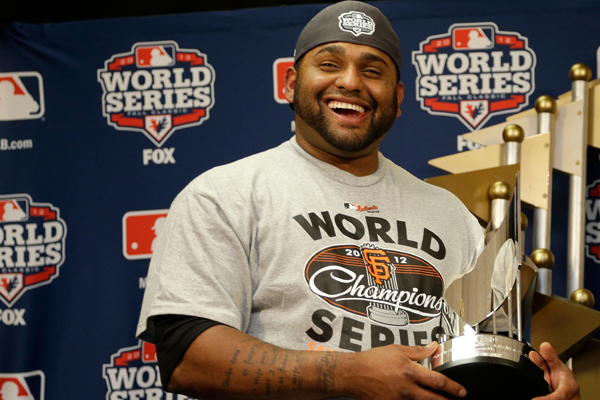 From the Associated Press:

On a ragged baseball diamond, its grass tall and infield dirt pockmarked, nearly 200 boys practice for hours every day. Many of them are inspired by the example of Detroit Tigers slugger Miguel Cabrera, who learned the game on this very field.

The baseball school in the poor neighborhood where Cabrera grew up is one of many across Venezuela, a web for training young ballplayers that has made the country an emerging power in Major League Baseball.

A record nine Venezuelans are on the rosters of the Tigers and the San Francisco Giants in this year's World Series. And the players have been giving Venezuelans plenty to cheer about with feats like Pablo Sandoval's three-homer game and Gregor Blanco's diving catches in left field for the Giants.

Baseball has long been Venezuela's top sport and a national passion, producing such greats as Dave Concepcion and Hall of Famer Luis Aparicio. But it has blossomed like never before the past decade and sent ever larger contingents to the major leagues from a large and well-organized system of youth leagues and baseball schools.

On this season's opening-day rosters, the 66 Venezuelans were second only to the 95 from the Dominican Republic for foreign-born players. For the World Series, the nine Venezuelans, nine Dominicans and two Puerto Ricans on the two teams produced a record 20 foreign-born players for the championship, surpassing the previous high of 16. Read more....

Listed below are links to weblogs that reference Nine Venezuelans Played in World Series: