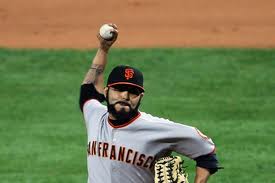 The San Francisco Giants are back to the World Series. Wahoo! With Brian Wilson recovering from surgery, the primary role of closer has ben assumed by colorful Sergio Romo. He grew up in Brawley, California, the son of migrant farmworkers from Mexico. Brawley has produced a number of major league baseball players. The opportunity to cross the border and play against great baseball players in Mexicali apparently helped hone baseball skills for others like Romo. Here's a great story on Romo and Brawley that aired on NPR this morning.

Listed below are links to weblogs that reference Baseball's Sergio Romo, Son of Migrant Workers: