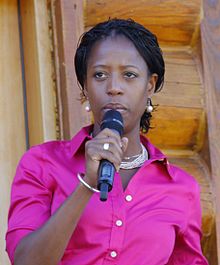 This Mother Jones article GOP Rising Star Mia Love: "Anchor Baby"? reports on Mia Love, a GOP rising star who is vying to become the first black Republican woman elected to the House.  Last month, she spoke at the Republican National Convention. She told her parenbts' story of coming to America from Haiti with $10 in their pockets.

Love, mayor of the small town of Saratoga Springs, Utah, has been widely spotlighted as a politician who is going places in the GOP. Recently, she served as an official surrogate for Mitt Romney on a campaign swing through Nevada, and she was the master of ceremonies at a fundraiser for him in Utah. "Though a child of immigrants, Love has embraced much of her party's tough stance on immigration."

UPDATE (September 28, 2012):  Stuart Anderson, president of the National Foundation for American Policy, on whether Utah Republican Mia Love is an "anchor baby" and the GOP's confusing rhetoric on immigration.