From the Bookshelves: Killing the American Dream: How Anti-Immigration Extremists are Destroying the Nation by Pilar Marrero 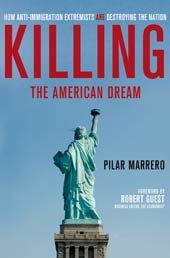 Next week, Palgrave Macmillan will publish Killing the American Dream: How Anti-Immigration Extremists are Destroying the Nation  by Pilar Marrero. As the United States government deports record numbers of undocumented immigrants and local and state governments scramble to pass laws resembling dystopian police states where anyone can be questioned and neighbors are encouraged to report on one another, violent anti-immigration rhetoric is growing across the nation. Against this tide of hysteria, Pilar Marrero reveals how damaging this rise in malice toward immigrants is not only to the individuals, but to our country as a whole. Marrero explores the rise in hate groups and violence targeting the foreign-born from the 1986 Immigration Act to more recent legislative madness of laws like Arizona’s SB1070, which allows law officers to demand documentation from any individual with “reasonable suspicion” of citizenship. Marrero reveals the economic drain these ardent anti-immigration policies are causing, as they deplete the nation of an educated work force, undermine efforts to stabilize tax bases and social security, and turn the American Dream from a time honored hallmark into an unattainable fantasy for all immigrants of the present and future.

Killing the American Dream is a timely look at the evolution of U.S. immigration policy and how anti-immigration rhetoric and behavior are doing more harm than good to America and the dream upon which this country was built.

Listed below are links to weblogs that reference From the Bookshelves: Killing the American Dream: How Anti-Immigration Extremists are Destroying the Nation by Pilar Marrero: