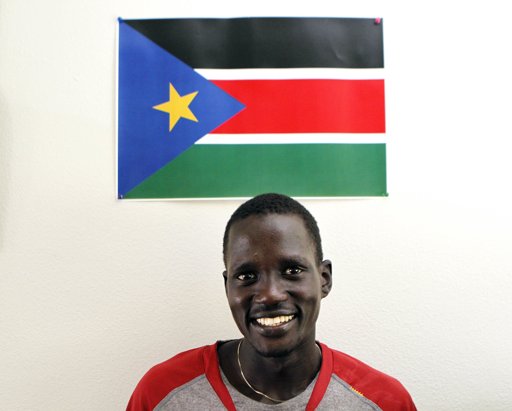 The Olympics can always be counted on for fascinating international stories.  Here is a London Olympics refugee story.

The International Olympic Committee Executive Board has approved a request to allow marathon runner Guor Marial to compete in the London 2012 Games as an Independent Olympic Athlete under the Olympic flag. Marial was born in what is now South Sudan, which does not currently have a recognized National Olympic Committee. Marial, who does not hold a passport from any country, is a lawful permanent resident but is not a U.S. citizen and cannot compete for the United States, South Sudan or Sudan.  He now lives in Flagstaff, Arizona.  Guor Marial thus will run in the London 2012 Olympics but not wearing the flag of the newly-independent country.

The 28-year-old athlete fled to the United States during Sudan’s two-decade civil war, which in 2005 led to a peace accord allowing the southern part of the country to secede last year. South Sudan has not yet formed a National Olympic Committee, so it cannot send a team to the Games.  The Sudanese team had invited him to join them but Marial who lost 28 members of his family in the war, turned down the offer.

Marial was one of millions of people who died or were displaced by the conflict in Sudan.  He is a graduate of the Iowa State University, haveing earned a degree in Chemistry.

Listed below are links to weblogs that reference Olympic Refugee Story: South Sudan refugee to run marathon in Olympics: