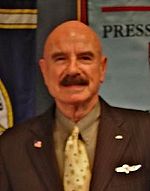 We have been updating blog readers about the racial profiling trial in Arizona in which Sheriff Joe Arpaio and the Maricopa County Sheriff's Office stands accused of engaging in a patter and practice of discrimination. One interesting twist to the case is that Tom Liddy, son of infamous Watergate figure G. Gordon Liddy of President Nixon's White House (and now talk show host), is the attorney representing Maricopa County.

According to the Phoenix New Times, "Liddy a former Congressional candidate [is] a bit of showman, wearing orange reading glasses and choosing not to stand at a podium but instead strutting before witness Ralph Taylor holding a mic in his hand like he's hosting a talk show."  It appears that Liddy, like his father, is a radio talk show host.