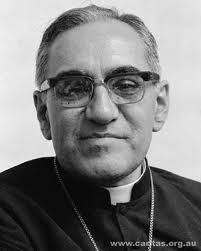 A central figure of the civil war in El Salvador from 1980 to 1992 is Father Oscar Romero. As the Archbishop of San Salvador during El Salvador's brutal civil war, Romero became the "bishop of the poor" for his work defending the Salvadoran people. After calling for international intervention to protect those being killed by government forces, Romero was assassinated on March 24, 1980. During the civil war, the United States spent over $5 billion supporting the El Salvadoran government in its brutal battle with guerrillas, most notably the FMLN (Farabundo Martí National Liberation Front).

Today we had an amazing discussion with Sister “Zoila,” (a pseudonym) who began working with Romero several years before he was appointed Archbishop. She told of how they helped to educate peasants and the poverty that these campesinos suffered. Even after Romero was assassinated, his work and inspiration continued. Zoila is one of those steady souls, whose resilience and courage is a model for the struggle for social justice for all of us.

Listed below are links to weblogs that reference Blogging from El Salvador #2: