From the Bookshelves: Intimate Migrations Gender, Family, and Illegality among Transnational Mexicans by Deborah A. Boehm 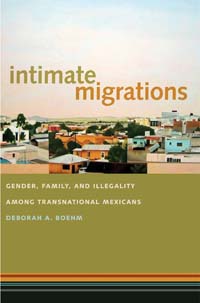 Intimate Migrations Gender, Family, and Illegality among Transnational Mexicans by Deborah A. Boehm 188 pages April, 2012.   Deborah A. Boehm has often asked individuals: if there were no barriers to your movement between Mexico and the United States, where would you choose to live? Almost always, they desire the freedom to “come and go.” Yet the barriers preventing such movement are many. Because of the United States’ rigid immigration policies, Mexican immigrants often find themselves living long distances from family members and unable to easily cross the U.S.-Mexico border. Transnational Mexicans experience what Boehm calls “intimate migrations,” flows that both shape and are structured by gendered and familial actions and interactions, but are always defined by the presence of the U.S. state.

Intimate Migrations is based on over a decade of ethnographic research, focusing on Mexican immigrants with ties to a small, rural community in the Mexican state of San Luis Potosí and several states in the U.S. West. By showing how intimate relations direct migration, and by looking at kin and gender relationships through the lens of illegality, Boehm sheds new light on the study of gender and kinship, as well as understandings of the state and transnational migration.

Listed below are links to weblogs that reference From the Bookshelves: Intimate Migrations Gender, Family, and Illegality among Transnational Mexicans by Deborah A. Boehm: