FROM THE BOOKSHELVES: Excerpt from Show Trials: How Property Gets More Legal Protection Than People in Our Failed Immigration System by Professor Peter Afrasiabi 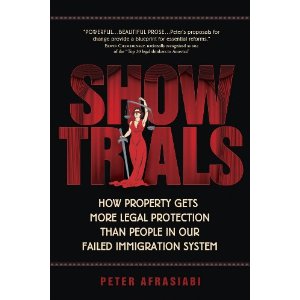 From pp.24-25 & 30 of Show Trials: How Property Gets More Legal Protection Than People in Our Failed Immigration System by Professor Peter Afrasiabi from the Section: WHO ARE THESE IMMIGRATION JUDGES AND CONSTITUTIONAL COURT JUDGES?

Immigration judges handle life and liberty cases. The immigrants—like Mr. Wang and Ecaterina—who appear before them face the potential loss of life if erroneously returned to a foreign land that may torture or kill them. They certainly face a loss of liberty if deported after developing lives and bonds in America, the same type of loss that the Supreme Court found to be of constitutional magnitude in the 1946 case of Bridges v. Wixon discussed in the Introduction. Similarly, constitutional court judges also handle life and liberty cases in their criminal cases. In those cases, criminal defendants face the specter of jail or even potentially the death chambers of our death penalty system. As well as property cases like the ones addressed and charted on these pages, these constitutional judges also assess civil rights cases, dealing with the important constitutional issues of free speech and religion, police brutality, race discrimination, or gender discrimination. All these equally implicate liberty interests of a constitutional magnitude.

Both sets of judges thus—whether haling from immigration courts or our constitutional property courts—share as a common denominator that they are responsible for deciding life and liberty questions of people who appear before them. Another notable common denominator is that both sets of judges earn roughly the same pay. For the 2010-11 timeframe, the approximately 267 immigration judges across the country earned roughly $155,000-$165,000 in salary and the approximately 604 federal constitutional judges in the federal trial courts (the constitutional court analogue to the immigration court) earned a near similar salary of $174,000. Required to assess cases of similar constitutional magnitude and earning similar pay, the natural question to assess, then, is whether constitutional judges and immigration judges are comparable from a judicial quality perspective, or whether in fact they are vastly different.

Is your interest piqued?  Here is an abstract of the book:

Narrative nonfiction assessment of the failed American immigration system focused on the individual constituents of the system: the judges, the federal courts, the law itself, the government lawyers, the private lawyers and the unrepresented immigrants. By tracing real world cases, the absence of due process and erosion of justice is seen. At various points, the book pivots to the world of property law where the same due process infirmities, as seen, do not exist. Rich in historical context and filled with new, never-before-published date, the book delivers a powerful contemporary narrative of the immigration system that forces readers to question basic assumptions about modern immigration policy. The book concludes with specific reforms.

Listed below are links to weblogs that reference FROM THE BOOKSHELVES: Excerpt from Show Trials: How Property Gets More Legal Protection Than People in Our Failed Immigration System by Professor Peter Afrasiabi :