BORDER PHOTOS SHOW ON THE BORDER WALL ITSELF 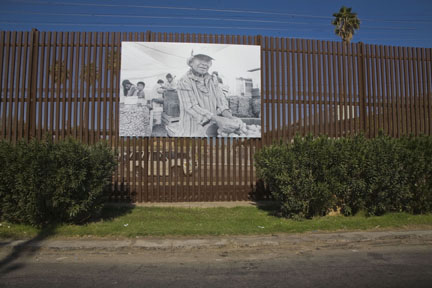 On February 2, the Center for Cultural Investigation of the Autonomous University of Baja California mounted an exhibition of 18 large photographs, taken by photographer David Bacon, on the border wall, next to the garita, or gate, between Mexicali, in Mexico, and Calexico, in the United States. The photographs, which measure about 6' by 4', hang on the steel beams that make up the wall in the section of the border that lies between the two cities. They hang on the Mexican side, next to the lanes where traffic lines up, waiting to cross into the U.S. At times, hundreds of cars spend over an hour in the lines, giving drivers ample opportunity to look at and react to the images. The show, called "Beyond Borders," consists of images that document the process of migration. Some show the life of Mexican migrants in the U.S., while others were taken in migrants' home communities in Mexico. Three photographs show children working in the fields in northern Baja California, including one taken just a few miles from the Mexicali gate itself.

In an interview with local media at the show's opening reception, in a park across the street from the wall, Bacon explained, "As a photographer, I've tried to create images that aren't neutral. They are, first, a reality check, showing what life is actually like, trying to do it through the eyes of people themselves. But they are also a form of social criticism - of poverty, of the discrimination and unequal status migrants face, especially in the U.S., but even in Mexico itself. Therefore, they're also a call for social change. So what better place to show them than on the wall itself? The Center is using an object hated on both sides of the border, and reclaiming it as a site for developing popular culture, and even more, a space where people can be urged to make changes so that some day we live in a world where the wall itself will not exist."

Luis Ongay, director of the Center for Cultural Investigation of the Autonomous University of Baja California, said that many people will see the show, because of its location where cars and pedestrians are crossing to the United States. "We know this is an open space, it's bringing the museum into a public space." He invites people to give their comments on its Facebook page.

Christian Fernandez, center subdirector, noted that the exhibit uses images that are part of a project of popular art and culture, and then shows them in a way that is accessible to ordinary people. "We have a show about migration, and the people looking at the images are those who themselves are crossing the border - migrating." He pointed to two images, one depicting an old labor camp in the Palo Verde Valley, which housed bracero workers in the 1950s, and another portrait of a former bracero, taken in Oaxaca. "Some former braceros, who are very old now, come on Sundays to this park to meet and talk with each other. What will they think of the images that show parts of their own experience?" Bacon especially thanked Natalia Rojas, who was able to create the very high quality prints. The prints were made on plastic-coated fabric, stretched across metal frames, and coated with an anti-UV protective film. Fernandez said he hoped that the prints would survive the next three months of the show, and that if they did, the center might then bring them to other sections of the border wall in Baja California.

Listed below are links to weblogs that reference BORDER PHOTOS SHOW ON THE BORDER WALL ITSELF :