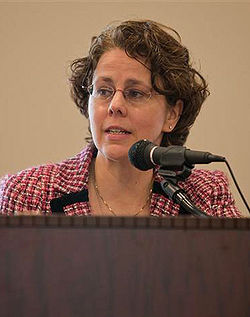 President Obama has named Cecilia Muñoz, a longtime supporter of comprehensive immigration reform, as his Domestic Policy Advisor and director of the White House Domestic Policy Council. Muñoz, the current White House director of Intergovernmental Affairs, is the first Latina to direct domestic policy issues for any American president.

Muñoz, a native of Detroit, is the child of Bolivian immigrants. A graduate of the University of Michigan and the University of California, Berkeley, she became a senior immigration policy analyst at the National Council of La Raza and ultimately became senior vice president of research, advocacy, and legislation. During the 2008 presidential campaign, she advised Obama on immigration.

Muñoz has been criticized by Latinos for defending Obama administration programs, including Secure Communities, which have resulted in record-setting numbers of deportations (including the deportation of many immigrants guilty of petty criminal offenses).