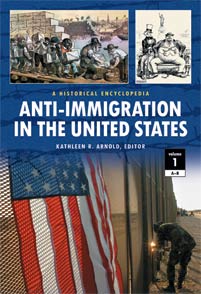 Abstract: A comprehensive treatment of anti-immigration sentiment exploring debate, policies, ideas, and key groups from historical and contemporary perspectives. America is a country of immigrants. It is also a country whose history is rife with demonstrations of anti-immigration sentiment, directed against the Irish, the Chinese, the Italians, and many other groups. Contemporary society displays its own prejudices, notably against "Arabs" and "Hispanics." To counter such unsavory movements requires understanding of individuals and issues, cause and effect.

Anti-Immigration in the United States: A Historical Encyclopedia is one of the first encyclopedias to address American anti-immigration sentiment. Organized alphabetically, the two-volume work covers major historical periods and relevant concepts, as well as discussions of various anti-immigration stances. Leading figures and groups in the anti-immigration movements of the past and present are also explored. Bringing together the work of distinguished scholars from many fields, including legal theorists, political scientists, anthropologists, geographers, and sociologists, the work covers aspects and issues related to anti-immigration sentiment from the establishment of the republic to contemporary times. For each time period, there is a focus on key groups, representing both actors and those acted upon. Political concerns of the time are also discussed to broaden understanding of motivation. In addition, entries explore the role of race, gender, and class in determining immigration policy and informing public sentiment.

• More than 150 A–Z entries on the key features of anti-immigration sentiment from political, economic, ethnic, and historical perspectives • Photographs

• A separate volume of more than 50 primary documents recording the history of anti-immigration movements and legislation, including famous letters from Benjamin Franklin and Abraham Lincoln

• Provides an A–Z reference on anti-immigration sentiment, a subject for which there are no comparable references

• Offers both contemporary and historical perspectives

• Explores ideas that are highly relevant to contemporary political debate

Listed below are links to weblogs that reference Immigration Book of the Day: Anti-Immigration in the United States: A Historical Encyclopedia, Kathleen R. Arnold, Editor: