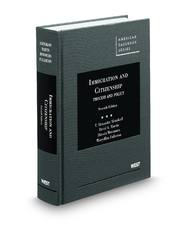 Immigration and Citizenship, Process and Policy, Seventh Edition will be published in late December and available for spring 2012 classes. The seventh edition of this pioneering casebook continues its tradition of comprehensive coverage, with problems and exercises that allow students to hone skills as counselors, as litigators, and as policy advisors. At the same time, the casebook situates immigration and citizenship law within broader contexts of constitutional and administrative law as well as current political debates.

This new edition is reorganized for more efficient coverage, with an introductory chapter on immigration history; treatment of unauthorized migration alongside lawful admissions; consolidated treatment of inadmissibility and deportability; reworked materials on state and local enforcement; and thorough redesign of materials on criminal convictions.

This edition includes several significant new features that reflect not only a comprehensive updating of prior material, but also a rethinking of immigration and citizenship courses in light of current trends. For example, unauthorized migration is now treated in the chapter on admission categories, to reflect the reality that immigrants arrive in the United States both lawfully and unlawfully. Inadmissibility and deportability are now consolidated into a single chapter with relief from removal to allow more efficient coverage and draw out the connections among these topics. Recent developments in legislatures and courts have prompted a thorough redesign of the materials on state and local involvement in immigration law enforcement. The treatment of criminal convictions starts with the issue of effective representation in the criminal defense context and then focuses on conflicting approaches to determining the immigration consequences of convictions.

Listed below are links to weblogs that reference Out in December 2011: Immigration and Citizenship, Process and Policy, Seventh Edition, T. Alexander Aleinikoff, David A. Martin, Hiroshi Motomura, Maryellen Fullerton: