From the Bookshelves: Living "Illegal": The Human Face of Unauthorized Immigration 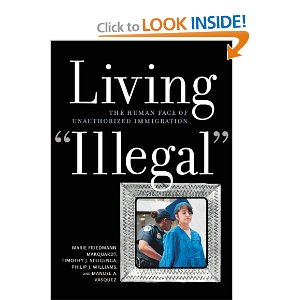 Today’s polarized debates over immigration revolve around a set of one-dimensional characters and unchallenged stereotypes. Yet the resulting policy prescriptions, not least of them Arizona’s draconian new law SB 1070, are dangerously real and profoundly counterproductive. A major new antidote to this trend, Living “Illegal” is an ambitious new account of the least understood and most relevant aspects of the American immigrant experience today. Based on years of research into the lives of ordinary migrants, Living “Illegal” offers richly textured stories of real people—working, building families, and enriching their communities even as the political climate grows more hostile. Moving far beyond stock images and conventional explanations, Living “Illegal” challenges our assumptions about why immigrants come to the United States, where they settle, and how they have adapted to the often confusing patchwork of local immigration ordinances. This revealing narrative takes us into Southern churches (which have quietly emerged as the only organizations open to migrants), into the fields of Florida, onto the streets of major American cities during the historic immigrant rights marches of 2006, and back and forth across different national boundaries—from Brazil to Mexico and Guatemala. A deeply humane book, Living “Illegal” will stand as an authoritative new guide to one of the most pressing issues of our time.

Listed below are links to weblogs that reference From the Bookshelves: Living "Illegal": The Human Face of Unauthorized Immigration :