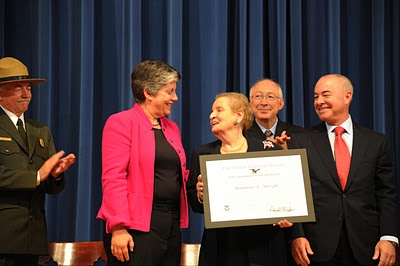 "Today, we were honored to join 50 U.S. permanent residents as they took the Oath of Allegiance to become U.S. citizens in the heart of our nation’s capital. This special naturalization ceremony concluded our weeklong celebration of Constitution Week and highlighted an important partnership between our Departments. Nineteen of America’s most iconic national parks and cultural heritage sites – from Federal Hall National Memorial in New York City to Yosemite National Park in California – served as the backdrops for naturalization ceremonies across the country. Our newest citizens follow in the footsteps of our 64th Secretary of State Madeleine Albright [a previous ImmigrationProf Immigrant of the Day] – herself a naturalized citizen – who was recognized during the event as an Outstanding American by Choice. Secretary Albright’s inspiring remarks reminded us all of the incredible contributions naturalized citizens can bring to our nation. Welcoming enterprising immigrants into the American family is a fundamental part of our heritage and an important part the continued success of our nation. Individuals like the 50 new citizens honored today remind us that America is still a beacon of hope and opportunity for millions around the world."

Listed below are links to weblogs that reference Celebrating Citizenship Day and the Outstanding American by Choice Initiative by Secretary Napolitano and Secretary Salazar :